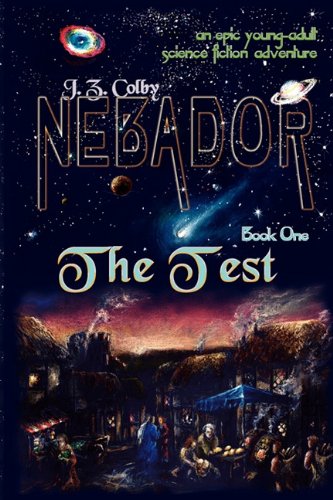 NEBADOR Book One: The Test
by J. Z. Colby
Age Range - 12 and up
Genre - Adventure

A young man,Ilika, from Satamia comes to Earth looking for companions. Ilika is a captain of a ship, and the companions he finds will be the members of his crew. This is not an easy task, because there are many requirements to be accepted as a crew member, such as street smarts and a willingness to learn new things. He looks all over town, going everywhere, looking for eligible young people, but everyone is too busy with their lives to become a part of his crew. After all hope is lost, he finds the people he needs in the most unexpected of places.

Many slaves, both boys and girls, from all over the land are gathered; he decides to choose five to travel with him on his adventures. He makes all the slaves do a test to determine if they fit his requirements. He ends up with ten candidates and cannot narrow down his choices, so, he decides he will train all of them for a while and then see who the five most equipped to be on his team are. But they soon run into some trouble, and it will take all of them to make it out alive.

There was so much I really enjoyed about this book; it was truly a blast to read. I found many of the characters to be very likable, especially Ilika, Sata, Mati, and Kibi. Some of the slaves that he did not choose were quite rude, but thankfully they were only present for a short period of time. The villain, who was a priest that wanted to arrest Ilika, did not appear as much as villains usually do in stories, but I liked that it was not overwhelming when he did appear.

It takes a good portion of the book for Ilika to determine where he can find the companions he is seeking. Once he does, the preparations to test them require even more time. Thankfully the author always kept things interesting so I was never bored. The reader is kept in the dark for a long time about what the young man’s true intentions with the slaves are, and the exact details of their journey. Even by the end, there are still many unanswered questions.

There was a test that Ilika gave to the slaves to see who would be the best fit for his crew. The cool part about this is that the reader is able to join in and do the test as well by looking at the diagrams shown on the page. The test was very fun, but I will admit that at even some points I was unsure of what the correct answer was.

It was so great to see these slaves become free. I saw them as individuals, with their own unique personalities, who could be extremely smart and talented. I liked that there was not always a surprise around every corner, much like how things are in normal life. Also, things stayed at a good pace, and thankfully never became too predictable.

It was fun to review the topics Illika discussed when teaching his students. For younger readers, they may learn a lot, just as the ex-slaves did. I cannot wait to read the rest of the series, and look forward to more by this author.

Although quite few and far between, slavery, drinking, smoking, cursing, intimate relationships, and violence all appear or are mentioned at least once, with some coming up multiple times.
KEYWORDS

Read more reviews by this Litpick Book Reviewer: Sweetfable
Recommend this book and review to your friends on Facebook