My Crunchy Life review by ongsai 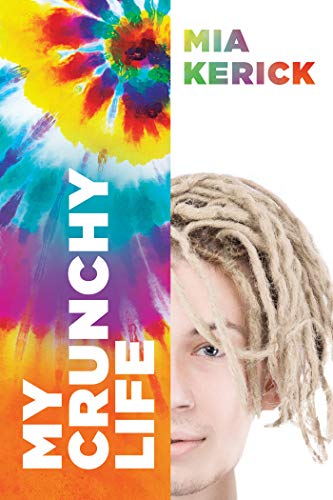 Julian has already decided that he's always wanted to be a girl, that growing chest hair was not on the list of to-dos. He's already tried to take his life once because of the stress of bullies, but now he's ready to go through the transition that will make the dream come true.

Kale, on the other hand, is a wishy washy mess. Is he a prep? Goth? Being a hippie is his latest phase: no meat, earth-friendly clothes, being friendly to all.

By some twist of fate, both he and Julian wind up at the Rights For Every Human Organization. At first Kale is quite confused by his emotions toward this new character and how they're supposed to fit in with the rest of his hippie ways, while Juilan only sees Kale as a facade and not a real believer of equal rights. Through a couple adventures to aid a mutual friend, they end up helping each other realize the person they are confident being, and that is to be together.

This book was very well-written. The structure of the story was mostly chronological. There were no chapters; the narration switched between Kale and Julian, labeled with italicized time stamps, which was helpful as it compared what each one was thinking at almost the same time.

I thought that the characters were well-developed. Kale, for one, was the definition of a high schooler:  trying to figure out where you fit in. He tried to walk in so many different spheres but not really based on what he wanted personally. When he saw Julian being himself, regardless of the bullying he has to withstand, Kale woke up to the fact that he was being a fake and that he just needed to be...Kale. Julian was a really good parallel to Kale, as again, he saw what he wanted to be and was striding straight toward it.

I loved the relationship he had with his mom: she was not angry or offended with Julian's decision and only wanted him to be happy and to be proud of him. She did worry because any medical solution for a gender change can have some bumps along the way, but she'd stick with him through thick and thin. Julian was not arrogant with his mom. He loved her and did have a modicum of guilt for making her pay for all of the medical procedures, which means he's an empathetic person. The whole storyline was also good because it didn't focus directly on their conflicts, which I thought was a smart move. Through one of the main conflicts, they were brought together and figured out how they felt towards each other. One thing Ms. Kerick did really well was making the mean characters. They were perfectly mean and horrible and are exactly what people out there really are to others who seem different.

I would recommend this book to any person who is just trying to figure out what they want in life.; it's not just a book for the LGBTQ community. It's a good book to teach a life lesson that the only opinions that matter are from the people who care about you.

This is definitely a topic for an older audience, as some younger ones might not understand that implications that go along with this kind of conflict. And there is some strong language.
KEYWORDS