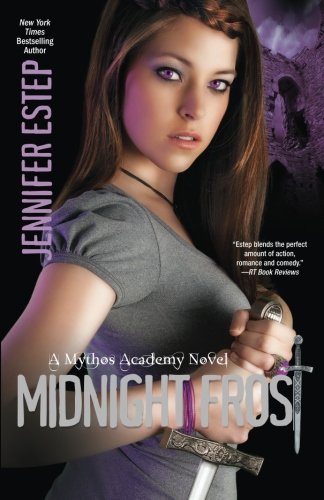 Gwen Frost has returned stronger than ever in the fifth addition to the Mythos Academy series. Just when she thought she had a break from Loki’s minions, a Reaper appears in the Library of Antiquities and attempts to poison her. Instead of killing Gwen, the Reaper accidentally poisons Nickamedes, the head librarian. With her boyfriend, Logan, gone and unreachable, Gwen is more unsure of her actions and decisions than ever, yet she musters on in the hope she’ll be able to find the antidote. Will she be able to find it in time, or will she perish in the search?

Jennifer Estep shows her brilliance once again in Midnight Frost: A Mythos Academy Novel. Estep further develops the character of Gypsy girl, Gwen Frost, in a novel that is both mystifying and alluring. The storyline was very well written; however, Gwen’s character begins to lack the spunk and courage she had in the first four books of the series. There was the focus on the search for the antidote, but it seemed as though the story plot mainly focused on the absence of Logan, Gwen’s boyfriend. It did pick up in the middle, and the focus once again returned to defeating the Reapers. It is still an amazing book, and though it is not as good as the first four, it has it’s own unique voice. I cannot wait to see where Estep takes Gwen in the next book in the series. This is recommended to girls and to mythology lovers ages 13 and up.

There are a few phrases that may be offensive, and there is continuous reference to the main character's boyfriend and how much she misses him. Some parents are wary about anything with boyfriends and girlfriends, so this was a mature content rating as a precaution.
KEYWORDS

Read more reviews by Litpick Student Book Reviewer: kfc1997
Recommend this book and review to your friends on Facebook