The Kill Order review by Melissa32301 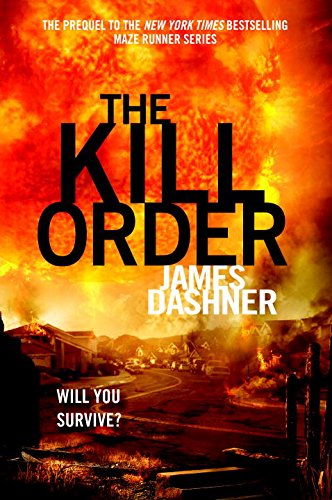 The Kill Order takes place before the rest of the Maze Runner series: before WICKED was formed, before the maze was built. Mark and Trina were there when the disease broke out and they survived. Mark and Trina soon discover that the disease is mutating into something worse, and they’re determined to figure out how to save the life of those who are left, but first they have to keep themselves alive.

Dashner's prequel to The Maze Runner series was disappointing in a few different ways. First, the characters were rather bland. I love the series, but to be honest, this book was unneeded. The characters were never fully developed and they didn’t get much time to sit and talk to each other so we could get to learn about both of them. The second thing I didn’t like was that he made the new characters, Mark and Tina. I would have preferred a backstory on Thomas and the other Gladers. It would’ve been more enjoyable to read about them before the Glade.

Although there were shortfalls, some of this book was helpful; it gave a little more insight about the disease and what happened, but there didn’t need to be an entire book about it. Dashner could’ve put it as a prologue in one of the books or all of them. I liked the action in the book. There was a lot of it., and it fit perfectly with the rest of the series. Overall, Dashner wrote a pretty good prequel. There were some major disappointments, but his writing form was as good as ever.

Dashner's books are written for middle aged readers, so there wasn’t anything too bad in it.
KEYWORDS