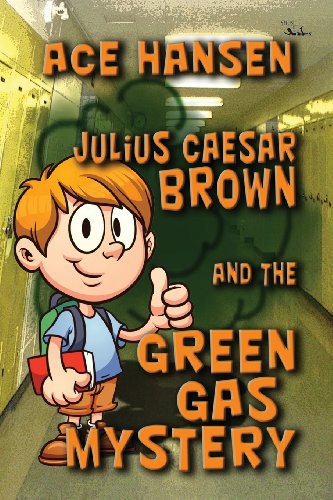 In this story, there is a mystery about a green gas that people can see if they fart.The story begins with just a normal boy named Julius, who is not that great at typical academic school subjects. He lives in a family where his father has just gotten divorced and this makes him upset. But as the story develops, he finds himself solving a mystery with a strange person who acts like a zombie. Towards the end he tries everything to enter his theories of the case. Although he doesn't succeed in solving this first case there's still a prize that he gets and then he discovers that there's still another mystery to solve. What a bonus!

I think the story was great. It had several twists during the end. My favorite part was when Julius still got some money even though he was the second person to solve the case.This was something I was not expecting.and caught me off guard, I also like the ending because of how there's still another mystery at the end.In adittion, they finally begin to act like a real happy family becuse they learn how to deal with their dad's divorce. All in all, I would recommend other kids to read this book because of the unexpected twists that are in this story.For example, "SPOILER ALERT,"  I did not expect that Julius would buy something like big baggy pants so he wouldn't become embarrased in front of a girl. These pants kept the green gas from leaking out. Even a great solver of mysteries needs to worry about his appearance.

This is nothing offensive because it was fun to read and if it did I would put the book down but, my eyes were glued on the book because of how fun it was to read
KEYWORDS

Read more reviews by this Litpick Book Reviewer: Nightdoesminecraft303
Recommend this book and review to your friends on Facebook