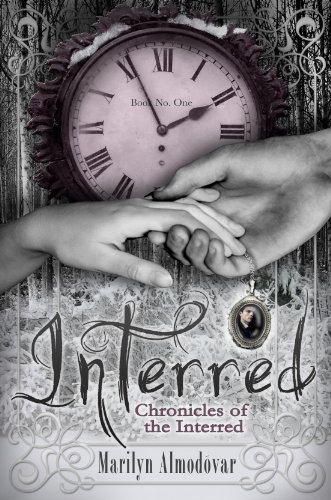 INTERRED
by Marilyn Almodóvar
Age Range - 12 and up
Genre - Fantasy

Interred kicks off on a dark, stormy night in backwoods Vermont. When protagonist Baxter glimpses an eighteenth-century teen lurking in her backyard, she questions her own sanity before doubting the space-time continuum. But when her estranged cousin Fred barges into the family's farmhouse, he brings good and bad news. On the plus side, Baxter's psyche remains, for the time being, intact. The bad news? Declan, the broody boy prowling around her garden, isn't just real; he's also her reluctant mentor in all things magic, duty-bound to guide Baxter through the emergence of her powers as a time-bender.

Even worse, the Council (yes, that's as sinister as it sounds) forces Baxter into the internment. According to the Council, burying Baxter alive will trigger her powers and hasten her growth into the generation's most powerful time-bender. But when Baxter rips a portal through the space-time continuum, she and love interest Jack flee the internment altogether. As far as Baxter's portals take them (Vermont! New York! The 80s!), however, Fred won't surrender— because Baxter's powers are all that stand between her slime ball cousin and his crazed scheme for vengeance.

Endure Interred's sluggish beginning (Baxter meets a lot of people and stages the world's most epic cram session on magic, Declan, and the ominous Council), and you'll reap the rewards of perseverance. Once the internment begins, Baxter and Jack whirl from one encounter to the next in a frenzy of wormholes, time travel, and blood by the gallon. But in the quest for brisk pacing, Interred can sometimes veer through an abrupt, unfounded series of plot events: an apparently secure floor collapses when convenient, and Baxter and Jack's jaunt through the 80s feels a little unnecessary. Still, Interred culminates in an epic battle— and betrayal. If you're craving some vicarious superpowers (and don't mind puzzling through a tangle of double-agents, mind control, and shifting alliances), Almodóvar's Interred will leave you— and your heartbeat— racing till the very end.

Contains a fair amount of violence, although none of it's graphic.
KEYWORDS