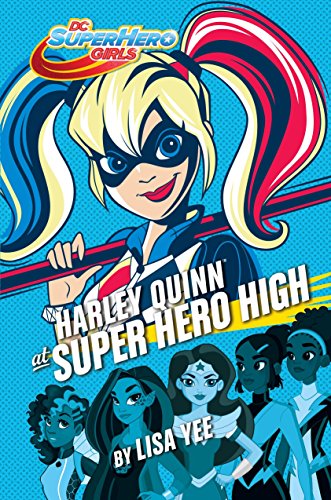 Harley Quinn is known as the class clown at Super Hero High. She runs her own web series called Harley’s Quinntessentials and is obsessed with ratings and getting the scoop on the latest news ahead of serious teen journalist Lois Lane. The rest of her friends and classmates: Batgirl, Wonder Woman, Poison Ivy, Big Barda, Katana, Beast Boy, and The Flash help her out whenever possible, even when they grow tired of her practical jokes and hyper personality.

To boost her ratings, Harley organizes talent contests, such as a Dance-O-Rama and Battle of the Bands, where both heroes and villains compete live on Harley’s webcast. These contests cause Harley’s Quinntessentials to soar in popularity. In between events, Harley is busy neglecting her schoolwork and her friends, taking time out only to fight crime when trouble comes knocking.

Then, the Krazy Karnival comes to town, and Harley decides to shoot live from inside the carnival and host a rematch of the Battle of the Bands. However, the carnival, run by the mysterious J.J. Tetch, isn’t what it appears to be. This forces Harley to have to choose between filming her show or saving the day.

As a DC superhero fan, it was a fun twist to read about these iconic heroes as teenagers with amazing abilities. Author Lisa Yee perfectly captures the voice and personality of each individual hero in their young forms. Harley’s bubbly energy shines through in the way that she moves and speaks. Even when she’s just talking to Batgirl in her dorm room or eating lunch with Wonder Woman at Capes and Cowls Cafe, she’s turning backflips and cracking jokes. Harley keeps things exciting, and the story moves fast as she bounces from one chapter to the next.

It was also fun to see older characters pop up as teachers and faculty, such as Lucius Fox, Commissioner Gordon, and Amanda Waller who use their skills and knowledge to teach the young heroes everything they need to know. This series would make a great animated TV show with so many heroes and villains to explore in how they handle typical high school situations as well as using their powers to fight crime.

This story also teaches a good lesson. Harley is obsessed with gaining popularity for her show. Popularity and acceptance is something that we all want in high school, and she will do anything to get it. That causes her to ignore her friends and schoolwork. She starts to forget what’s really important, and it’s not until she faces a larger threat that she realizes that fame isn’t everything.

I recommend this book to both boy and girl superhero fans who like action-packed stories full of humor along with a lesson to learn.

A lot of action and a little cartoonish violence but nothing gory and no bad language.
KEYWORDS

Read more reviews by this Litpick Book Reviewer: Laura335
Recommend this book and review to your friends on Facebook