Hanging By A Thread review by kaiyle 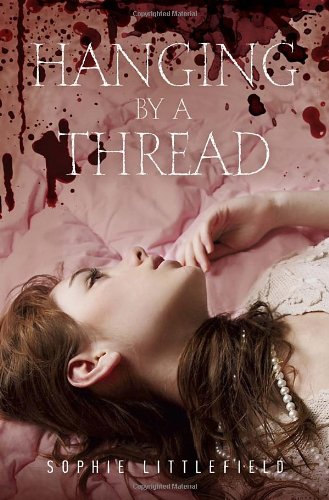 The best part of summer in the little town of Winston is the Fourth of July festival. The townspeople this year, however, are hoping the festival will end better than the previous two years, without the murder of one of their children.  Despite the people of Winston's insistence to keep everything as normal as possible, the media is all over town, talking about a serial killer and predicting a third murder.

When Clare Knight returns to Winston, only a few years after leaving, she is amazed at the drastic differences from what she remembered of her childhood home. Everyone has secrets, even Clare's best friend, and Clare is drawn even deeper into the lies and secrets when she finds the denim jacket of last year's murder victim. Clare has a gift, or, according to her mother, a curse, that allows her to see people's pasts when she touches their clothes. After finding the jacket, Clare begins to see through all the lies within the community. But how far will she dig into the murder case before she becomes the next Winston murder victim?

I thought that Hanging by a Thread was a great read. It was really fast paced and there are no unneeded details. The characters were very relatable to high school students by dealing with partying, appearance, and secrets. I would recommend this book to anyone who likes a murder mystery with a little bit of romance.

There are a few references to sex and alcohol but nothing too offensive.
KEYWORDS

Read more reviews by this Litpick Book Reviewer: kaiyle
Recommend this book and review to your friends on Facebook