The Greatest Wish review by cowboys1 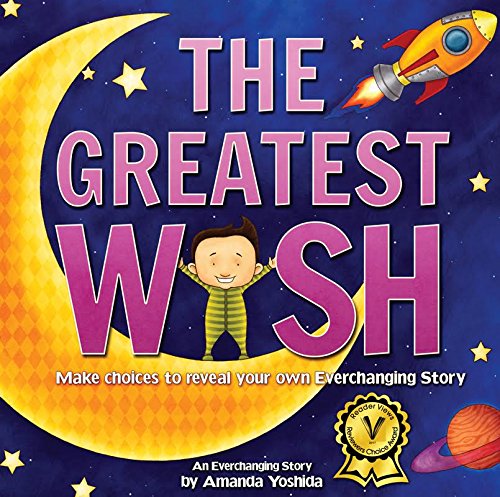 This is a fun and engaging children's book. A young boy spends his evening thinking about what he would rather be. He thinks of many imaginative things, both living and non-living, anything except a boy.

This book is designed to be different each time you read it! It has a series of tabs that the reader follows. The tabs chosen depend on the choice the reader wants the boy to make. For example, the boys tries to decide between becoming a giraffe or a dinosaur. If the reader chooses to become a dinosaur then they should follow the arrow from the dinosaur and turn to the number tab the arrow points to.

The boy wishes to be many different things, but he manages to find a problem with becoming each and every one. By the end of the story, he discovers the greatest gift.

I found this story to be so much fun!  Despite being older than its target audience, I read the story over and over again. Each time I made different choices to see what it would say next.

The concept is pretty different. It sounds confusing at first, but after paying close attention to the tabs, I was able to can catch on pretty quickly. I did have to pay attention though, because there were occasions I ended up on the wrong page and the story didn't make sense.

This would be a fantastic story for parents to read to their child or a teacher to their classroom because it is ever changing and interactive!

A prefect story for all ages
KEYWORDS

Read more reviews by this Litpick Book Reviewer: cowboys1
Recommend this book and review to your friends on Facebook