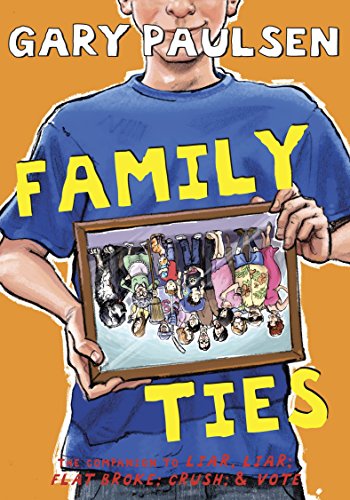 The main character and narrator in this book is Kevin Spencer. Kevin Spencer is a family guy, in fact he loves his family so much that he volunteers to  plan a double wedding for his family and is inviting all the relatives. Now doesn't that sound fun? Who is getting married, you might wonder?

His Uncle Will shows up with his new wife and her son, along with their polar bear of a dog, Athena. Uncle Will and Brandee had a very simple ceremony with no family in attendance. Kevin suggests they get remarried that weekend at their house so all the family can be there. Before you know it, Kevin has to plan a double wedding and all his rambunctious relatives come barreling through the door, along with friends. There is crazy Uncle Will, Dad’s brother. Brandee is Uncle Will’s new wife, and she has a son named Larry, who they call “Sparky” because he loves starting fires.  Kevin’s older sister Sarah lives, sleeps, eats, with her phone. And older brother Daniel is obsessed with hockey. Auntie Buzz, Mom’s sister, lives in the apartment over the Spencer's garage, with her boyfriend Jack. Kevin’s grandmother, Lucille only cares about cleaning. And there's Kevin's mom, who's always wondering why she ever married into this crazy family.

Now Kevin’s guests have increased, and he has to plan two weddings in one week! It seems like everything that can go wrong does go wrong. It is up to Kevin, the glue of the family, to help his family through a very long, very loud, and VERY stressful weekend.

I LOVED this book. It is funny, and it's about family. Could it get any better??? This book is very well written, and I have no bad comments about this book. This book is fiction, and I recommend it for all ages. I really like how the author wrote the characters and their unique personalities. I really enjoyed that there were so many characters in this book. There was some bad language in this book, but overall, it was terrific! I think that Gary Paulsen did a wonderful job on this book, and I hope you do too. I give this book five stars!!!

There was a little bit of bad language.
KEYWORDS

Read more reviews by Litpick Student Book Reviewer: muffin
Recommend this book and review to your friends on Facebook