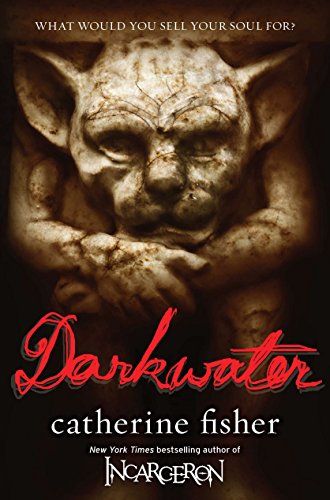 Darkwater
by Catherine Fisher
Age Range - 12 and up
Genre - Fantasy

Darkwater is about a 15 year old boy named Tom, his dead and ghostly brother Simon, and Sarah. Sarah and Tom were born about 100 years apart, but are both drawn to Darkwater Hall by a man named Azrael. Sarah's family used to be the wealthy owners of Darkwater Hall until her grandfather gambled all of their possessions away to Azrael. Living in poverty, Sarah makes a bargin with Azrael. She trades her soul for 100 years and an ample amount of money to right the wrongs that her ancestors have done to the people living around Darkwater Hall. 100 years later, Sarah returns to uphold her end of the bargin and she meets Tom and his brother Simon, who died after he was born but had grown up as Tom has. Tom wishes he could go to Darkwater Hall, which is now a school open to anyone who can afford it. Tom meets Azrael, who offers him a job as an assistant to him. Tom accepts, and Sarah, Simon and Tom spend the next week trying to find a way to save Sarah's soul.

I thought that this book was interesting, but that it was rather confusing. There were mentions of magic, but the author did not elaborate on them and left the reader in the dark. I also didn't like the ending to the book. Throughout the whole story, the author made Azrael out to be an evil warlock who would do whatever he had to to get what he wanted, but then at the end, she portrayed him as a good person who did only what he promised and nothing else. I just thought that it was a little random and disorganized. However, it was well-written and kept me interested in the story. I would recommend this book to anyone who enjoys fantasy and mystery type books, but it will take some brain power to understand what is happening.

There was nothing content wise that I felt was inappropriate except for the bargaining and gambling between the characters. There was some mention of abuse, but nothing gory or extremely bad.
KEYWORDS

Read more reviews by this Litpick Book Reviewer: Feeder24
Recommend this book and review to your friends on Facebook