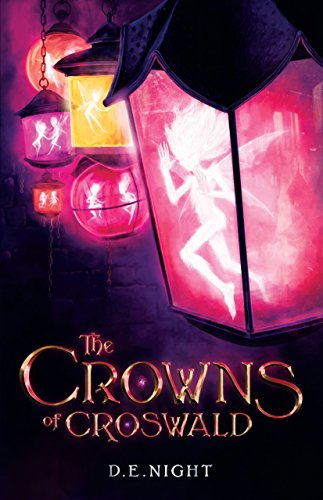 The Crowns of Croswald is based on the story of Ivy Lovely - a sixteen-year-old slurry girl, the lowest of the low, who works as a kitchen maid at Plums Castle. When Ivy crosses the enchanted boarder and the magic within her awakens, her life will never be the same again.

In the Halls of Ivy, Ivy meets new friends, learns about magic, and uncovers things that some people would rather have stay secret. With ghostly hosts, pies, pies, and more pies, and (of course) magic, the Halls of Ivy just about make Ivy burst with curiosity. Ivy, being no stickler for the rules, has a tendency to get into trouble, and more often than not, she pays for it. But the Dark Queen is coming, fully prepared to kill anyone in order to get to Ivy Lovely's birthright - including Ivy herself.

The Crowns of Croswald was a great book. It was well-written and clear, with lots of details and excitement. The characters all had unique personalities, and it was very fun to learn more about each one. This book could be loved by young readers who enjoy stories about magic. When I first started this book, the created vocabulary was a little hard to follow, but once I learned what was what and who was who, it was more enjoyable to read. With the cliffhanger at the end combined with all of the questions I have, I can’t wait to read the sequel. I feel like this book will be most enjoyed by children between the ages of 10-12, mostly because of D.E. Night’s simple writing style and the plot of the book, which can be seen as similar to other books like Harry Potter and also The Lion, the Witch, and the Wardrobe.

There is some death and talk of crushes, but overall nothing too bloody or romantic.
KEYWORDS

Read more reviews by this Litpick Book Reviewer: NatsustayHappy
Recommend this book and review to your friends on Facebook