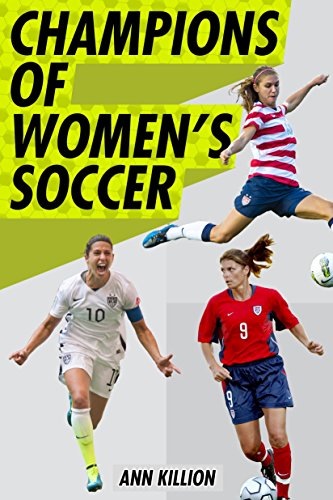 Champions of Women's Soccer is a book that gives facts about some of the best women to play soccer, as well as some facts like the top 10 goals ever made and some of the history of soccer. The opening chapter is about Mia Hamm, followed Abby Wambach, Michelle Akers, Kristine Lilly, and eight other U.S. soccer stars. One of the stories is about Hope Solo, who became the goalie for the U.S. national team. She grew up in Richland, Washington, where she played soccer in high school and was a forward, scoring 109 goals. She received a scholarship to University of Washington to play goalie. Hope was the star in many of the games, blocking goals and saving shots. She was fired after saying that Sweden's team was a bunch of cowards.  This episode caused an uproar, with many people saying that this was a perfect opportunity for her to leave the sport, as she had been playing for 17 years and was now 35, while others said that a male soccer player wouldn't have been fired in this scenario. Hope said that she felt she was being punished for filing a wage discrimination claim. She was one of the best soccer players in the U.S.

I thought this was a good book. I love soccer, so it was very interesting for me to be able to read about some of the world's best soccer players. It was enjoyable to look at because at the start of every chapter it has a soccer ball, and at the end, it has the statistics for the player you just read about. It has additional information like top 10 saves, biggest upsets, and penalty kicks. It also has an index in the back and some pictures of the players in the book.  I gave this book five stars, because it is fun to read and pleasing to the eye.

Some of the women in this book marry their girlfriends.
KEYWORDS

Read more reviews by this Litpick Book Reviewer: Emmaline
Recommend this book and review to your friends on Facebook