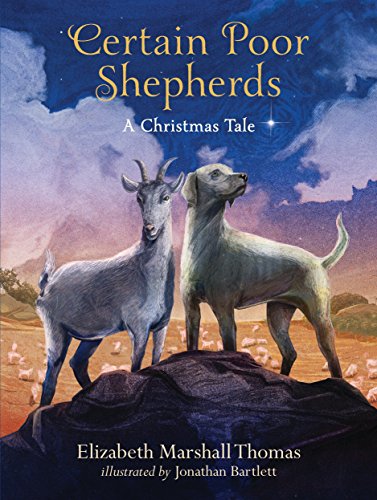 Certain Poor Shepherds is a story set around the time of Jesus Christ’s birth. The two main characters are a goat named Ima, and a enormous dog named Lila. The two are the closest of friends and have protected their master’s sheep for as long as they can remember. In a surprising turn of events, Ima and Lila become separated. Ima is left to watch over the flock of sheep by herself while Lila tries to find her way back to Ima. Through hardships they wind their way through the desert and the bustling town of Bethlehem. Eventually they connect with each other only to be captured by a party of hunters along with the flock. Ima and Lila struggle to return the flock to their owner. Will they return home? Or continue to live under the rule of the hunters?

Animal perspectives always make for a interesting sort of tale. The viewpoint that was presented was different and unique in a charming, animal way. Despite being a dog and a goat, the author did a wonderful job of introducing and developing the characters in the story.

One confusing part in the story was when the author introduced angels who seemed to have come from a long journey. They arrived and played with and fed the animals. Angels frequently fill the story, and only the animals can see them. The tale also failed to come across as a nativity story. The only time the nativity story is mentioned is when one of the animals is in the stable, looking down on baby Jesus.

A surprising part in the story, which I enjoyed, was toward the end when Ima and Lila are captured. At the camp, Lila demonstrates friendship and love to another dog by sharing her meals. Lila’s backstory, although sad, is interesting and gives the readers something to ponder.

Geared towards younger readers and those with a love for animals, Certain Poor Shepherds is a book partly about the nativity story but mostly about the character’s relationship presented from an animal’s point of view.