A Brush with Colours review by reading4ever 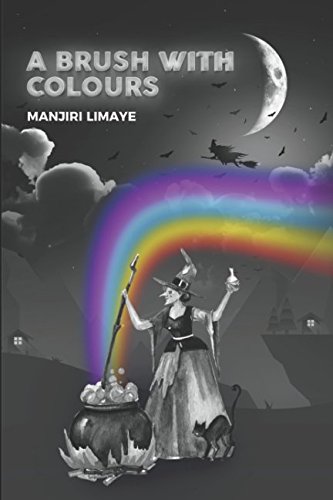 Imagine living in a world with witches and wizards, with mysterious spells and bubbling potions that can grant you powers such as flight and invisibility and a very long life. This is the fabulous world that the young wizard Zoran lives in. Despite all its wonders, however, Zoran’s world lacks one of the most wonderful things in the world: colors. The entire earth is dull, colorless, translucent, and everything has a glassy look to it. Zoran does not know what he and the world are missing – all he cares about is swimming and being with his mother, until one day, he is sent to fulfill his late grandmother’s last wish. He is sent to the end of the earth to bury a box, and upon his return, he opens another box at the other end. And when he opens it, he unleashes several creatures he cannot contain: colors.

Adriana is a young girl who lived long before Zoran. She wishes to become chief witch more than anything else in the world, despite being a second-born child. When her wishes unexpectedly come true, she is elated. Unfortunately, she is unprepared and prideful, and worst of all, alone after her father’s death. When people begin questioning her powers, Adriana decides that she will stop at nothing to maintain power… even when it means paying a great price.

Vega is a talented witch who lived hundreds of years before Zoran or Adriana, when witches and wizards were only starting to discover their powers. She has much greater talent than most witches and wizards of her time, but she wishes to use her power make the world more beautiful instead of using it for her own gain. With time, she manages to create colors, but she needs to find a way to use them to color the whole world, even if she won’t be alive to see them.

Luca is a young wizard who is the son of Adriana. He excels at potion-making, but the poor child has a speech impairment that causes him to mix up the first letters of words, causing him to mess up his spells terribly, such as conjuring a “rough toad” instead of a “tough road.” He is mocked and ridiculed, and worst of all, his mother forces him to give up potions, makes him go out in public, and wants to force him to become the next chief. Luca wishes nothing more than to escape…if he can.

A Brush with Colors is a charming story told from the perspectives of Zoran, Adriana, Vega, Luca, and a few of the colors Aurelia (Gold), Alyssa (Yellow), Deniz (Blue), and Smara (Green). Although their stories seem completely different, the colors are what bind their stories together in mysterious ways. Each one of them has different motivations, but they all want to color the world… if they can overcome several different trials.

I found A Brush with Colours to be a charming story. I read the whole story in about one sitting, and I found it rather short, at only about 96 pages. Personally, I found that the author, Manjiri Limaye, rushed certain aspects of the story – especially the beginning – to such a degree that I was rather unsatisfied with these parts. The story would have been a tad better, I believe, if she had given more detail and more description, although I understand that she was limited in her use of sensory language because, of course, there were no colors, which makes description difficult, although she could have appealed to different senses.

Another slightly disappointing aspect of the story is that a part of it that I believe was meant to be a surprise (which I will not mention to avoid spoiling the book) was rather easy to deduce, and I was able to connect the dots very quickly. The element of what was supposed to be a surprise would have made the story more enjoyable, if only it was harder to find.

If you love fantasy stories or fairy tales, this book will be an excellent fit for you. If you are looking for a short, easy-to-read story that is still enjoyable, I would recommend this book for you. I wouldn’t necessarily recommend it for readers looking for a more advanced story, however.

Overall, I enjoyed the book but found it lacking in certain areas.

There is no mature content in A Brush with Colours at all. This makes it an available reading choice for a wider range than the LitPick suggestion of 12+, in my opinion.
KEYWORDS

Read more reviews by Litpick Student Book Reviewer: reading4ever
Recommend this book and review to your friends on Facebook