The Brilliant World of Tom Gates review by Wyatt01 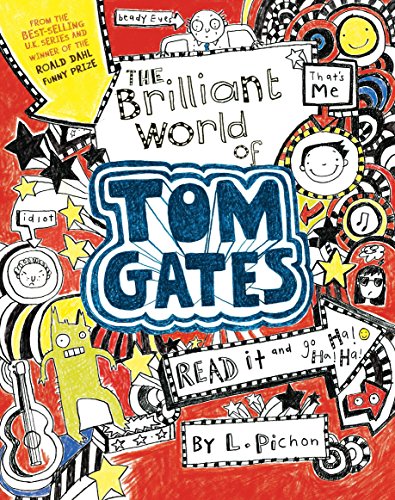 In The Brilliant World of Tom Gates, Tom has three hobbies- annoying his sister Delia, being in a band (the Dog Zombies), and eating caramel wafers. Tom also has a lot of things in his life that bug him. He gets stuck sitting between the annoying Marcus Meldrew and way too close to his teacher Mr. Fullerman. His sister drives him crazy and his Dad dresses like a homeless man when he picks him up from the bus stop. Tom's teachers give him too much homework, but he always finds a creative way to get out of doing it. Also, he is totally in love with a girl named Amy and if he could just score tickets to his favorite band's concert, he's sure Amy will like him back (because, of course, the band will invite him on stage to sing their final song). Tom's imagination helps him all throughout the book. Everything that can go wrong in Tom's life usually does, like terrible camping vacations with his family, interesting class trips, or the outcome when he finally gets tickets to see Dude 3. Somehow, Tom always manages to find a way to come out on top. This story is told in journal form with doodles and pictures on every page which make this story really easy to read.

I really liked this book. I laughed out loud so many times. Tom's drawings are hilarious, and I liked that the story was told with so many doodles. I think it made it much easier to read. I also liked that Tom was always trying to find a funny excuse for not doing his work, but his teachers still really liked him. He wasn't disrespectful or rude, just funny. There were so many great parts in the book like the fire drill, the choir practice, and the class assembly. I never knew what was coming next, but I knew it would make me laugh. Also, one thing that was great was that I could relate to all of the things Tom goes through. All kids try to get out of homework! Anyone who likes Wimpy Kid books or Timothy Failure will enjoy The Brilliant World of Tom Gates.

This book contains nothing that would be considered offensive. It is generally absent of violence, sex, drugs, swearing, and crude comments.
KEYWORDS

Read more reviews by this Litpick Book Reviewer: Wyatt01
Recommend this book and review to your friends on Facebook