The Break-Up Artist review by Samamarz 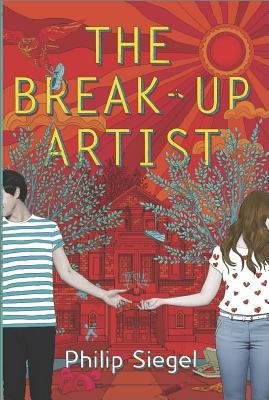 The Break Up Artist by Phillip Siegel is about Becca Williamson, who is in the business of relationships, or more like ending relationships; people pay her to end other people’s relationships. In Becca’s school single girls are obsessed with finding a boyfriend, including her best friend, Val, who is willing to sink pretty low to get a boyfriend (I won’t say how because it would be a spoiler). One day a mysterious client asks Becca to break up Becca’s old best friend, Huxley, and her boyfriend, Steve, who happen to be homecoming king and queen. Becca, of course, takes on this challenge. She know it will be dangerous, but she thinks the payoff will be worth it—the payoff being that school will be “safe” for single people. While she is trying to devise and set in motion a plan to break up Huxley and Steve, Becca finds that she has feelings for Val’s boyfriend.

The Break Up Artist is a quick and easy read; it relies heavily on female 2 dimensional stereotypes and has a very thin plot, making it easy to just pick up and read. The narration can get annoying, and often I wished any of the characters—especially the girls—had substance. All the girls talked about was relationships, and this book does not pass the Bechdal Test. The Bechdal Test tests whether a book/movie/whatever has fair representation of women. There are only 2 qualifications to pass: 1) there are 2 or more female characters 2) they talk to each other at some point about something other than a man. The lack of complexity in the female characters was insulting because all of the girls could have been stand ins for the other girls. Also, another concerning thing was that it was always the girl’s fault when a relationship went bad, and they were all so desperate to be in a relationship that the guys in the school could be obnoxious and still have girls fighting over them. Overall, I thought the idea was clever and original, but the execution was terrible.

There were a couple of sexual comments but nothing too graphic.
KEYWORDS

Read more reviews by this Litpick Book Reviewer: Samamarz
Recommend this book and review to your friends on Facebook