Boundaries: How the Mason-Dixon Line Settled a Fam... 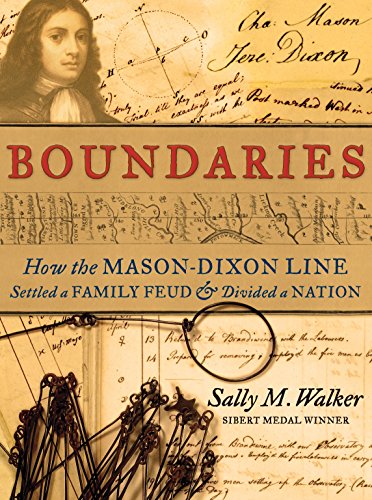 The book I chose, Boundaries: How the Mason-Dixon Line Settled a Family Feud and Divided a Nation, by Sally M. Walker takes place in a colonial setting where the 13 original English colonies in North America make a map of the area and there is an error in the map regarding colony borders. The colony hires a team of surveyors to correct the error and set the boundary line straight.

This book was interesting because it touched on many relevant historical issues and I believe that they were discussed in an interesting and informative way; as well as being an accurate and relevant issues of when the events in this book took place and the research precluding the creation of the Mason-Dixon Line.

The first of these topics the book explained was in the title. This part of the book covered social, political and religious boundaries in colonial times. It discussed how limited the social policies were in England in colonial times.

The second of these topics the book discussed how limited the equipment was in that era, as they had to use wagons, tread through marshes, place stones and chains to mark where the boundary was and use the stars to navigate. This was interesting because it compared how simple and difficult to use the technology was back in colonial days; as nowadays we can just use satellites mapping the earth and updating maps, as the surveyors back in colonial times had to draw the maps by hand. After Nights of observation, they took days to do the calculations by hand, as they had no calculators.

The third of these topics that the book explained on was how life was back then. The book explained how the surveyors had to ask and recruit others to help them to do tasks such as carry wagons, take care of the horses pulling the wagons and people to set up and gather food.

Lastly, the book discussed the historical impact of these events. The Mason-Dixon line left a lasting impression on the community as the community grew, eventually becoming a tourist attraction.

I enjoyed this book because as I explained in my summary, the author touched on many events. This book was interesting because it was engaging and very accurate. The story was easily comprehendible and deep. There were not many characters to keep track of and the main idea was very clear. I also liked the format this book was presented in. It helped present the facts clearly.

Read more reviews by this Litpick Book Reviewer: blaklab66
Recommend this book and review to your friends on Facebook