The Blood Curse review by ongsai 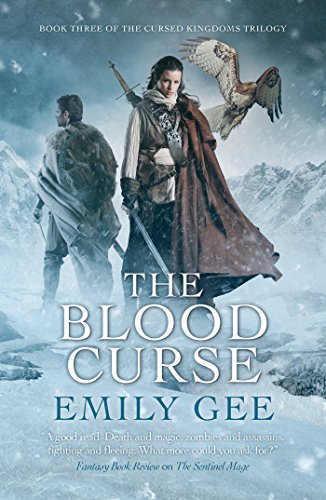 This book follows three different stories. The first one is with a boy named Jaumé, who is only a mere child. He is traveling with a man named Bennick, who he considers his protector, after his family was killed by the curse. Bennick, is a Brother, a warrior from Fith, a trained assassin. As they travel together, Jaumé starts to battle against himself. He trusts Bennick more than anything, but the man Bennick was sent to kill, is the only hope for the safety of the Seven Kingdoms. He does not know who's side he's on, and in the end, his split second decision, will decide the fate of the world.

The second story follows Princess Brigitta and her armsman's (Karel) journey to save her. Britta (aka Brigitta) has been captured by Fithian assasins, in the hopes of using her as bait to get her brother. Karel courageously goes after her with a team of armsmen at his command. Eventually, Karel is captured as well and both he and Britta plan to escape.

The third story follows Prince Harkeld and his company of mages. Their journey takes them to the last anchor stone, the final lock that will take away the curse. As the company's numbers begin to dwindle, it is up to Harkeld, Innis, and Petrus to get the prince to the stone, before they are consumed by the curse.

While all three stories continue, Ivek's Curse is spreading rapidly. Anyone who drinks the water will be filled with a madness that drives them to kill without thought or memory of who they were before. Those who drink the water, must be killed before they hurt anyone else.

In my opinion, the book could've been a lot better. To be fair, I liked the way that the three stories seemed so far apart in the beginning, but began to intertwine into the big picture near the end, and the characters encountered each other, and I could read the account from both sides. I thought the idea of the curse was very clever, considering it was bound to the water, and since water was a vital thing to people, it made the spread of the curse more intimidating and the quest to stop the curse more urgent.

As much as the curse was cool, a few of its aspects could've been a lot less violent. For one thing, it seemed that a person died every 30-50 pages because of the curse. Also, the fact that the curse drove people to rape as well as kill was just wrong. Gladly, it wasn't descriptive about that, but it was plenty suggestive anyway.

For another thing, the development of some of the characters was a little weak. For Harkeld, his relationship with the other mages is very blunt and not smooth at all, and his relationship with Innis was very choppy, in the sense of how it grew. I really liked, though, the developement of Jaumé as he traveled with the Brothers and Bennick. It was interesting to see his decesions, and it kept you guessing which side he was on, until the very end.

To cap it all, their language was quite crude. There was a lot of sexual references and jokes that were very cringy. Also, the magic part of the book was not very well thought up. It seemed like the author was trying to pull ideas from other "magical" books but didn't totally want to plagiarise so it ended up not being a very good idea.

There are quite a few sexual jokes and insinuations throughout the book, and the curse itself, drives people to kill and rape.
KEYWORDS

Read more reviews by Litpick Student Book Reviewer: ongsai
Recommend this book and review to your friends on Facebook