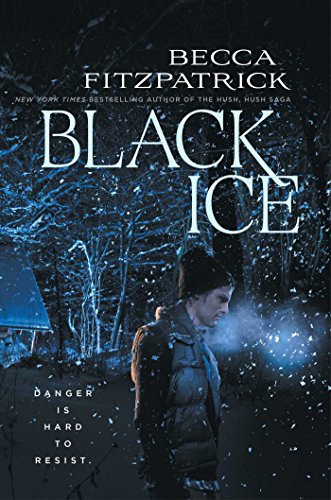 Britt wants her ex-boyfriend, Calvin, back. She plans to get him back by backpacking in the Tetons for spring break with her best friend Korbie. Calvin is a fan of backpacking, and he's also Korbie's older brother. Just as everything is going according to her plan, Britt and Korbie get stranded in a snowstorm and are unable to make it to the cabin they’re planning to stay in. By chance, they meet two attractive strangers and take shelter in their cabin. However, these two strangers turn out to be criminals. They take Korbie and Britt hostage and force the girls to lead them off the mountain. Shockingly, Britt finds herself falling for Mason, one of the men holding her hostage. She knows that developing feelings for him could be dangerous. Will Mason turn out to be the sort of person she expects him to be?

I have to admit, I didn’t really go into this book with an open mind. I didn't have high expectations for the book, especially since I knew Becca Fitzpatrick had written the Hush, Hush saga. Yet this book surprised me. It was better than I expected it to be.

First, and probably most surprisingly, there wasn’t an instant love connection between the characters. There was instant attraction between Britt and Mason, but Fitzpatrick managed not to write their romance into something unbelievably contrived, which is a compliment considering the premise seemed unnatural to me. Their interactions were enjoyable and Mason was definitely swoon-worthy, if the reader could get past the fact that he was a criminal and he thought he could save the world by himself.

Just because their romance wasn’t contrived doesn’t mean that other aspects of the book were the same. Specifically, the way Britt and Korbie found themselves in the clutches of Mason and Shaun seemed far-fetched. Mason basically freezed Britt and Korbie out and told them that they aren’t invited into the cabin, and they still invited themselves in. I felt the girls were incredibly unaware and selfish to enter the cabin at this point. I understand that they were in dire circumstances; yet If someone blatantly tells you not to come into a house, I would think there must be a valid reason for them to do so.

The most disappointing aspect of this novel is the writing of the characters. Fitzpatrick has set her book up with characters that have the potential to be dynamic and intriguing, but I did not feel she fully delivered on that potential. Instead, I felt led as a reader to believe things about her characters. For example, it seemed she was trying to say that Britt was dependent on men when she didn’t need to be. Britt asked her dad for gas money before she left for her trip. Then, later in the novel, she said something along the lines of “I depended on the men in my life to rescue me.” I wish Fitzpatrick would give her readers more credit. As a reader, I don’t need to be told these things if the characters are described well enough through their actions. I don't like when an author explicitly explains characterizations. Additionally, Britt’s characterization doesn’t make sense to me. Why does she depend so much upon the men in her life? In order to be realistic, all character traits have to stem from something. It seems to me that Britt is given this character trait solely to illustrate her development as a character. Her character development doesn’t read organically to me.

The character interactions also felt lacking. The relationship between Calvin and his dad had so much potential to be interesting, but at the end it just felt contrived. Something so completely interesting as a dad pushing his son to a breaking point was reduced to a plot twist. The relationship between Britt and Mason, although it has the clichéd Stockholm syndrome label, could be given a more interesting layer. Instead, it just turned out that Britt simply perceived Mason’s motivations wrongly, and she forgave him for all his misdeeds once she found out the true reasoning for his actions. The only character relationship I found interesting was Britt and Korbie’s friendship cycle, but I still felt it was used as a plot development.

Additionally, I think this book needs more editing. Korbie and Britt listen to mixtapes, but they also aspired to having Katy Perry makeovers when they were ten. Some of her sentences are extremely awkward. For example, she once described Mason to “wag his head at the snow” (228). Not to mention, Fitzpatrick is repetitive at times. She explained how well Britt read the travel guidebooks in preparation for her backpacking trip three different times.

All in all, Fitzpatrick’s novel didn’t read as poorly as I was expecting it to, given the subject matter. However, it didn’t bring anything new to the genre either. She could have given much more depth to the characters and to their relationships, but instead I felt many aspects of the book served as plot developments. I guess that could be entertaining if you don’t think too hard about it.

Read more reviews by Litpick Student Book Reviewer: sumrsilentmusic
Recommend this book and review to your friends on Facebook