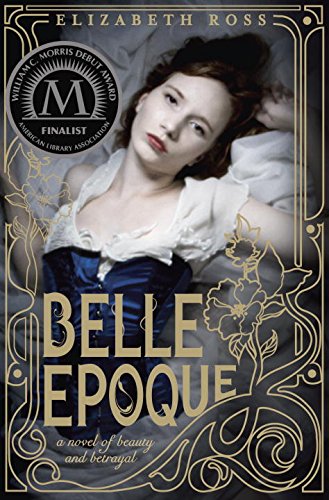 Set in the autumn of 1888, Belle Epoque by Elizabeth Ross is an exquisite tale about Paris society. Maude Pichon, a romantic young woman, has always dreamed of leaving her small village in Brittany to live in Paris. But when Maude reaches Paris with a pocket full of stolen coins, she soon realizes that her romantic idea of the glamorous capital city won’t help her survive there. Desperate for money, Maude answers a peculiar advertisement in the paper and finds herself involved in the new craze of society women: the beauty foil or “repoussoir.” It works like this: a rich woman hires an ugly “friend” from the Durandeaue Agency and then looks more attractive in comparison.

Soon Maude is hired by the Countess Dubern as a foil for the Countess’s daughter, Isabelle. However, there is one catch; Isabelle has no idea that her new friend is a repoussoir. As Maude attends parties with Isabelle, the Countess hopes that Isabelle will make a rich match. But soon Maude realizes that her blooming and genuine friendship with Isabelle jeopardizes her job. Isabelle dreams of going to university, a dream that means she will not marry. By helping Isabelle study, Maude is defying the Countess, and if she loses her job, how will she live? How long will Maude be able to to keep up this duplicity?

This beautifully written novel about 19th century Parisian society is a marvelous read. Inspired by Emile Zola’s short story, “Les Repoussoirs,” Ross has created a masterpiece. The characters are likeable and show interesting development, and the story is compelling. One thing I think is interesting is that most authors of historical fiction create female characters who are rebellious and who do not want to get married or pursue lady-like accomplishments. Isabelle fits this description. I think that most women of the time would have accepted and relished the opportunities that a rich woman like Isabelle would have had. However, I do believe that Isabelle’s rebellion does make the story more interesting and helps Maude to realize that she truly is friends with Isabelle. Ross’s debut novel is full of intricate details that reveal the true meaning of beauty and friendship. I highly recommend this book for girls 13 and up who like to read historical fiction. This book not only teaches you about the past, but also teaches life lessons that are as true today as they were then. I hope to read more books by Elizabeth Ross in the future!

While the book has some romantic themes (Isabelle's mother is looking for a husband for her), there is nothing that would be inappropriate for readers younger than the recommended age.
KEYWORDS

Read more reviews by this Litpick Book Reviewer: bookgirl1289
Recommend this book and review to your friends on Facebook