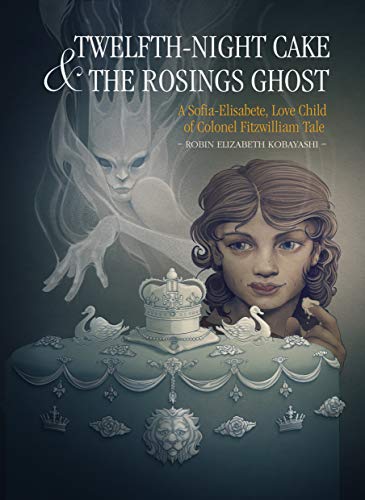 Twelfth-Night Cake & the Rosings Ghost
Robin Elizabeth Kobayashi
In this Christmas novella set in the year 1818, a plucky little girl must contend with a mischievous ghost at Rosings, an English manor-house.Sofia-Elisabete is “[a] sparkling, robust young hero with a distinctive voice—a real winner” (Kirkus Reviews, starred review).*Colonel Fitzwilliam and his eight-year-old daughter, Sofia-Elisabete, pass a winter’s month at Rosings, the estate of his aunt, Lady Catherine. There, the Colonel must help his illegitimate child, who is half-British, half-Portuguese, navigate the prejudices of their world as his outspoken daughter clashes with the imperious Lady Catherine.One evening, on the first day of Christmas, they hear the tale of the mysterious Rosings Ghost who, centuries ago, vexed the inhabitants of Rosings during the twelve days of Christmas. The next morning strange things begin to happen. Why has the Rosings Ghost returned now? Why does a furious Lady Catherine blame Sofia-Elisabete for all of the ghost’s pranks?Will our girl hero Sofia-Elisabete, with the help of her father, uncover the real secret of the Rosings Ghost and put an end to its tricks?The Sofia-Elisabete series, in part, reimagines the life and destiny of Colonel Fitzwilliam, the curiously evasive and opaque character in Jane Austen’s Pride and Prejudice. To read more about this special father-daughter relationship, see I, Sofia-Elisabete, Love Child of Colonel Fitzwilliam: A Perfect World in the Moon,* a novel, by the same author.
1 Vote