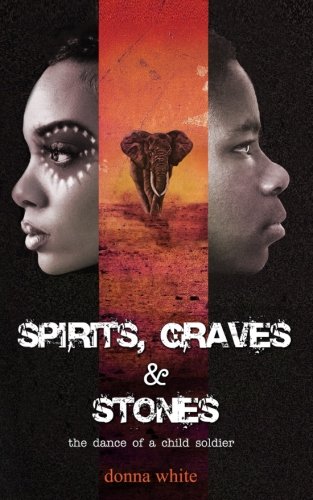 Spirits, Graves and Stones (Book 3 - The Stones Trilogy)
Donna White
Bruce shrugged. “Beats me. But I don’t think it matters whether you have a bow and arrow or a bazooka. I mean, it helps—that’s for sure—but I think it’s more of a choice thing. The soldiers chose to run away ’cause they were more concerned ’bout saving their own lives. That lady chose not to run ’cause she knew she couldn’t live with herself if she did. I know people say you gotta have guts to do these things, but I don’t think so. I think you just gotta live your life so you don’t have any regrets.” For twenty-three years, Joseph Kony, leader of the Lord’s Resistance Army, abducted more than sixty thousand children, forcing them to be soldiers in his war against the Ugandan government, to kill or be killed. It’s time for this evil to end. But how? Forgiveness or revenge? Peace or hate? Flowers or stones? Healing can’t begin when there’s so much pain. Broken people can’t mend shattered lives. In the last book of the Stones Trilogy, Charlie and Eseza set out to right the wrongs committed against them and their people. In the process, they discover that goodness can come from the most unlikely people, in the most unlikely places, and in the most unlikely times. “Donna White’s latest novel has the ability to change people, much like the magical stones referenced in her title: turning despair into hope; and finding strength even among the most vulnerable. The final revelation that peace is stronger than war is a much needed message for our troubled times, and a fitting conclusion to her compelling trilogy.” Patrick Reed, Director/Producer, Fight Like Soldiers, Die Like Children
1 Vote

The third and final installment in Donna White’s “The Stones” trilogy, Spirits, Graves and Stones ties up the loose threads left by the previous two stories. After getting caught by the Arrow Boys, Bruce is able to meet up with Charlie again, but the two of them realize that they have been separated from Sam and Scott and soon become worried about where their friends might have been whisked away to. The stones often don’t move people in groups to the exact same location, and Bruce and Charlie are left wondering where Sam and Scott are.