Tommy Black and the Staff of Light 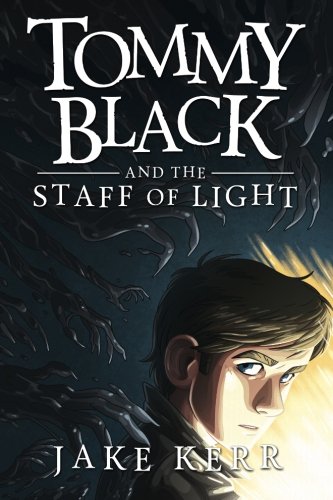 Tommy Black and the Staff of Light
Jake Kerr

For fourteen-year-old Tommy Black, nothing is worse than being raised by an overprotective grandfather in the city that never sleeps. That is until his grandfather is captured by magical creatures and Tommy has to save him with his family's magical staff. That wouldn't be so bad, but the only magic he can do with the staff is weak--making light. What the heck can you do with light?  Tommy finds out as he fights golems, shadow creatures, and djinn in a journey that features a magical river, an enchanted train, and an illusionary fortress. But the worst part of all? Tommy has to save his grandfather with the help of Naomi, a girl whose talent with magic is only rivaled by her ability to hurl insults. In this novel full of action and adventure, Tommy Black continues the tradition of young heroes finding their place in a formerly unknown magical world. Like Harry Potter, Tommy has a magical legacy thrust upon him from out of nowhere. He must not only understand this responsibility but the forces that are suddenly arrayed against him. Like Percy Jackson, mythology is plays a central role. And like both heroes, one of Tommy's best friends is a strong independent girl, who is a valuable ally while being headstrong and often difficult.  From Nebula, Sturgeon, and Million Writers Award nominee Jake Kerr comes the Tommy Black trilogy, an action adventure series for boys, girls, and readers of all ages.
3 Votes

Tweet
Tommy Black and the Staff of Light review by mknott

Tommy, a teenager, and his grandfather want to keep magic from running out and being replaced by newer technology. When his grandfather is captured, Tommy and his friend, Naomi, must rescue him using a magical staff. On his adventure he must defeat lots of creatures, protect the staff from people who want to destroy it, and rescue his grandfather.

What's this?
Tommy Black and the Staff of Light review by LegoLover

In Tommy Black and the Staff of Light, Tommy Black is the grandson of a powerful magician and Archmage. Tommy is unaware of his grandfather's true identity. The adventure begins when magical creatures attack and Tommy becomes an Archmage.  Tommy’s magical ability is the power to create and control light. He does not yet know that his ability is one of the strongest in the history of Archmages. Tommy’s powers are almost limitless; not even time itself can stop him! Now Tommy must try to save his grandfather from the magical creatures that have captured him.

What's this?
Tommy Black and the Staff of Light review by Corvin

In Tommy Black and The Staff of Light, Tommy thought he was a normal kid with a normal life. One day he went to the theater and then a restaurant, when suddenly he was caught in an attack against his grandfather by Shadows and his life is changed forever. He finds out he is actually the Archmage of Light, the most powerful Archmage in the world! Then his grandfather, The Archmage of Destruction, is captured by djinns.