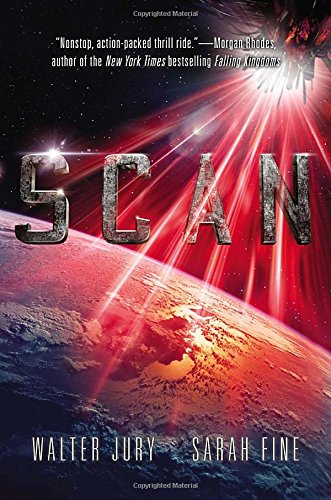 SCAN
Walter Jury, Sarah Fine
Tate and his father don’t exactly get along. As Tate sees it, his father has unreasonably high expectations for Tate to be the best—at everything. Tate finally learns what he’s being prepared for when he steals one of his dad’s odd tech inventions and mercenaries ambush his school, killing his father and sending Tate on the run from aliens who look just like humans.All Tate knows—like how to make weapons out of oranges and lighter fluid—may not be enough to save him as he’s plunged into a secret interspecies conflict that’s been going on for centuries. Aided only by his girlfriend and his estranged mother, with powerful enemies closing in on all sides, Tate races to puzzle out the secret behind his father’s invention and why so many are willing to kill for it.A riveting, fast-paced adventure, Scan is a clever alien thriller with muscle and heart.
1 Vote

SCAN is a book about a boy named Tate who lives with his father.  In Tate's opinion, he is always doing his best at everything, but his father always wants more.  One day, he breaks into his dad's lab to have some quiet time with his girlfriend, Christina.  While in his dad's lab, he discovers a device he knows nothing about.  Not knowing what it truly is, he takes it to school with him and later gives it to Christina.  While at school, Tate’s dad comes and confronts him with the fact that he knew Tate broke into his lab and took something.  A