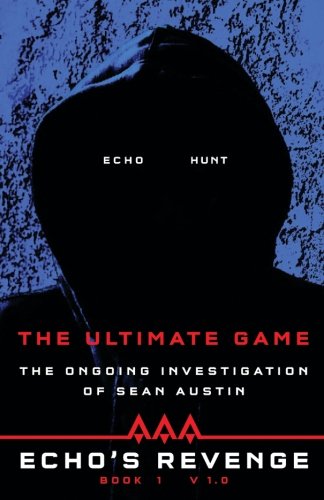 Echo's Revenge: The Ultimate Game
Sean Austin
Winner of the 2012 Parent's Choice Award,           recipient of the National Parenting Center's Seal of Approval"Starts off with a bang, containing no shortage of adventure, suspense, and imagination."-- VOYA Reviews (Teen Adventure)The entire gaming community, including top competitor Claire Hamilton,is in awe of fourteen-year-old Reggie King who can take just minutes todestroy the demonic game boss, ECHO-6, in the bestselling video game,ECHO'S Revenge. Reggie can't wait to test himself against the game's new and improved monster: ECHO-7. To Reggie, ECHO'S Revenge is more thanjust a game; it's his way to escape the harsh reality at home.But there's a glitch in the new release of ECHO-7. The gamedevelopers release a live version of the monster into the real world and now a 35-foot tall extreme predator clad in impenetrable armor with the power to shape-shift and turn invisible is hunting down every elitegamer who ever defeated it in previous versions. One by one, elite ECHOgamers are disappearing. And now, ECHO-7 is after Reggie.Reggie fears that the monster will also go after his younger brother Jeremy who's been steadily racking up plenty of monster-kill pointshimself. Determined to keep him safe, Reggie hatches a plot to destroythe monster and save fellow gamers. But can he figure out how to use his gaming instincts in the real world? And, can Claire help Reggieunderstand who he really is, so he can reach the next level?Echo's Revenge delivers non-stop, adrenaline-pumping action with ahero who is learning that it takes action to bridge the gap betweenfantasy and the real world--and that family loyalty is sometimes thetrickiest game of all.Rave Reviews For The Teen Adventure Book Of The Year!This young adult science fiction and fantasy thriller got rave reviews fromcritics, parents and male teen readers alike. The author, Hart Getzen,is a father of avid gamers as well as a writer and producer in the motion picture, simulation, and game industries. National Geographic Kids (Young Adult Action Adventure)"I would definitely recommend this book to someone in middle school or older." The Midwest Book Review (Video Game Fiction)"'Echo's Revenge' is a blend of familial and near-future science fiction that should resonate well with many young readers."Portland Book Review (Teen Books)"Imagine an online villain has come to life with a personal vendetta against you."Monsters and Critics (Young Adult Science Fiction And Fantasy)"A terrifying tale that will appeal to male gamers."American Chronicle (YA Adventure)"[Their epic adventure] brings them closer together as brothers and closer toan adult world in which they will have the confidence to survive."San Francisco Children's Fiction Examiner (Young Adult Action Adventure)"We recommend 'Echo's Revenge' to any reader who enjoys gaming, fantasy and a suspenseful story." Book Trends (Teen Books For Boys)"This action packed thriller is jam-packed with adventure and will keep you at the edge of your seat."The National Parenting Center (America's Leading Parent Advocacy Organization)"In this new kind of hybrid book that is woven together with a vibrantwebsite. Readers are taken on a wild ride that is aimed specifically atboys who have grown up in this video game generation. The story isdriven by chaos which is why it resonated with testers. It is anexciting, tense thrill ride from start to finish."Feathered Quill (Action Adventure)"Take pieces of The Maze Runner, add them to the fantastic movie from the 1980's - War Games - and mix in a little HALO for the fun of it, and you have this extremely interesting novel."The Book Review (Video Games)"Echo's Revenge: The Ultimate Game is an extremely well written and exciting book about the world of video games and gamers."Breitbart Reviews"Compelling reading for the tween male gamer demographic...about a young boy who finds adventure, courage and teamwork away from the computer screen."
1 Vote

Echo's Revenge: The Ultimate Game by Sean Austin is about the video game Echo's Revenge becoming a reality for its online players. The book is written around two brothers, Reggie and Jeremy, and starts in the small town of Meadowbrooke, Washington, with both of them playing Echo's Revenge. Reggie is one of the top players in the world of Echo's Revenge, and as such, he's able to kill the Echo in the game. However, their real life is not so good, with Reggie and Jeremy living with their absentee mother and their abusive step-father Asa.