The Tyrant's Daughter review by ViviB 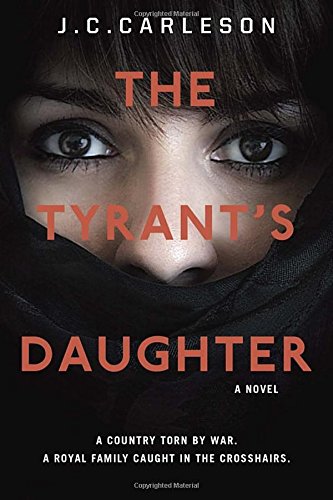 The Tyrant's Daughter
by J.C. Carleson
Age Range - 12 and up
Genre - Fiction

Laila is the teenaged daughter of the king of a Middle Eastern country. At least, that's what she thought. Following her father's death, she and her family are relocated to America with none of the luxuries they are used to. Once privileged and now living in a cramped apartment, Laila is the Invisible Queen and her brother the King of Nowhere.

As she and her brother, Bastien, continue to adapt to this new, free style of life they've been catapulted into, her mother continues to pull away, determined to return them to their country and for Bastien to become king.

We follow Laila as she struggles to come to terms with the truth of her family's political past and tries to unravel the secrets surrounding her. Will she discover what's in the secret phone calls her mother makes? Who are the strange visitors who visit her apartment and speak in her native language? Why is the CIA agent lingering around her mother, snooping for important information? And why does fellow immigrant, Amir, seem to hate her and her family so much?

I liked this book. The plot, though it began slowly, morphed into an intriguing story that I followed and enjoyed a lot. The suspense and mystery combined with the humor of a teenage coming-of-age story and a bit of romance was wonderful.

Laila was also a likable character. She was intelligent and interesting, with a touch of haughtiness reminiscent of her royal life. I thought that she was very well-developed, as were Bastien, her mother, and the people from her home country, like Amir. The American characters were somewhat one-dimensional, even though I grew to like Ian and Emmy, friends that she had in the U.S.

The ending was a proper one for this book, even though it might not have fully satisfied some. I thought that the writing had just the right amount of descriptiveness and told a compelling tale through first-person narration.

The Tyrant's Daughter was a story that I will not forget easily. It was honest, realistic, and unique, and I would recommend it to anyone who would like to read a deeper, more thought-provoking story. Though it is a young adult book, I think that adults could benefit from reading this just as much as teenagers would.

This book deals with topics that could be hard to handle for younger readers. It also has some scenes that may be deemed inappropriate for readers under twelve.
KEYWORDS