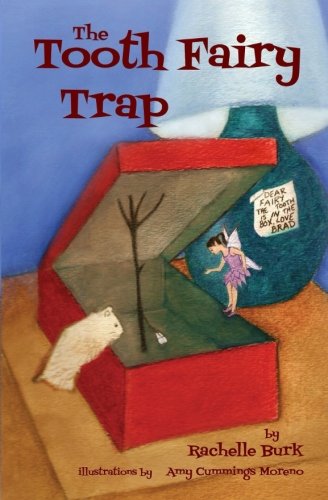 The Tooth Fairy Trap is an early readers book (for ages 5-8) that chronicles the night shift job of tooth fairy, Bluma. She takes her job very seriously and doesn't want to go back to polishing teeth like the younger fairies. Each night, she travels to the bedrooms of kids who have recently lost their teeth, leaves charming hand-written notes, and exchanges a coin for the child's tooth. However, the job isn't all fun and play. Unfortunately, Bluma is very allergic to fairy dust, and tonight, she must retrieve Bradley's tooth, set up in a clever trap. How can she escape his trap and be back by the last flicker of the firefly?

The Tooth Fairy Trap is an excellently written and charming children's book. I would have enjoyed it very much as a child! It's also one of those Junie B. Jones style books, which older children and adults can also enjoy. I found the characters to be interesting and well-dimensioned. For instance, Bradley's pet hamster is grumpy and full of personality. The written messages that Bluna exchanges with the (nicer) children are also extremely genuine and heartfelt. At one point, Bluna wishes that she could play with one of the little girls!

There was not really anything I disliked about the book. I would love to see The Tooth Fairy Trap made into a series if it is not one already. Perhaps Bradley the trap-setter can be reformed.

Note: the illustrations and the author's children's tooth fairy notes at the end were a nice touch.

Read more reviews by this Litpick Book Reviewer: Endless Summer
Recommend this book and review to your friends on Facebook