Through the Zombie Glass review by R. Mae 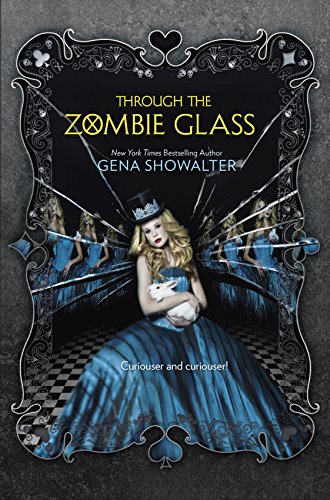 Alice is just getting over her parent's death. She is slowly building her new family, yet she still shields her heart. A part of her is afraid. At some point that part of her is taken over by Zombie Alice. It’s her dark side. The dark side sends her life spiraling into more madness. The slayers are falling apart. Cole makes some hard decisions, pushing Alice away and bringing in some new slayers to help with the fight. Alice can barely control the evil that is trying desperately to take over inside of her. Terrifyingly, that evil begins to destroy her. Both physically and mentally. Alice needs her friends to trust her, but she can’t even trust herself.

I’m a big fan of fast paced plots and this one really was. The action was heavy and the characters moved smoothly through it.There was this moment when Alice lights herself with the fire that kills zombies. The fire completely covers her body. Gena Showalter describes Alice moving from one zombie to another, floating over the ground and brushing her fingers along them.  It was flawless, and absolutely perfect. Her writing style totally inspires me. Thankfully, the romance didn't totally overpower the story. It just added to it.

You know, even though Alice Bell was going through a completely depressing situation, she refused to cave into the darkness. She continued to fight with that kick-butt, stubborn attitude. Through all her troubles she didn’t let anything bring her down. She was desperate to protect the people she loved. The character arch Alice went through practically drove the book. She had to fight her inner self, Zombie Alice, to become fully alive. It was a physical and mental thing. Alice’s boyfriend Cole seemed weird to me. It’s just a personal opinion. I like him, I like how protective he is. I like the sense of power that the author describes emanating off him. That's all cool. It’s just that the guy is a little messed up. He doesn't really appeal to me. He is over protective and super serious all the time. He gets on my nerves. I liked Gavin. He seemed more realistic. His attitude always made me smile, and I really liked the friendship he and Alice developed. That brings me to Kat. Kat is pushy, she makes her friends do things that scare them. She likes to talk, laugh, and pretty much have fun. She reminds me of myself. Except the fact that she is sick. It surprises me Alice isn’t more desperate to find an antidote or something for her best friend's sickness. Alice knows Kat is going to die soon, yet she does nothing about that. I can’t understand it.

Unlike the first book, barely any time is spent at school or in homes. Most of the time it’s training in Cole’s barn, fighting in the woods, or another place just as interesting. The scenes seemed awfully depressing sometimes, but not to the point of annoying. It was more on the side of realistic and understandable. Not all of life is happy-go-lucky. I mean, they are fighting zombies!

In most books, the romance is overpowering. A lot of people say that is how love works. For some reason though, over powering love exists for the main characters. How do you think all the side-kicks feel about that? Author Gena Showalter wrote this story differently. Almost every character had another half of themselves. Kat has Frosty, Reeve (Alice’s Friend) has Bronx, etc... It goes on and on. Each of them have a unique relationship. It was very realistic and gave the depressing setting a little light.

I am a Christian. I don’t like to hide my faith. In the first book the author wrote that she wanted to show the fight between good and evil, that she herself was a Christian. Now, that promise did not withstand. Yeah, in the first book she mentioned church a few times, but it didn’t even fit with the story. the characters' morals seemed askew in this book.  Not only were there very few Christian morals, God wasn’t even mentioned. There wasn’t actually sex, but the characters got pretty close. I’m not sure where the line is, but I think they crossed it. I do like that there wasn't swearing. That made me happy. The fight between the light and the darkness is cool, but as I said, this book didn’t really represent Christianity or how I view it.

There is a lot of kissing/making out.
KEYWORDS