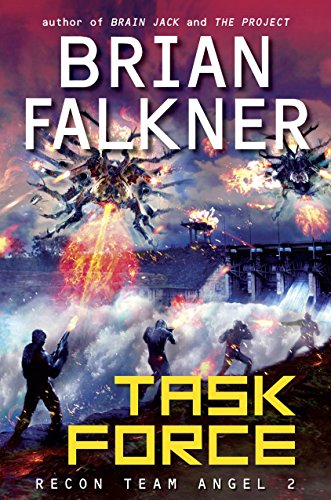 Task Force is a book based in the future. It is about, what a surprise, a  task force, whose mission is to cripple an alien invasion before it even begins. The task force is compromised of teenagers, who are altered and trained to look, talk, and think like the alien invaders. Their part of the mission is to clear a path for a preemptive force from the humans by taking out electricity in the Alien's city that they set up on earth, and guiding the large human force into the alien's city. They are relied upon heavily for the success of the human's mission to defeat the aliens and vanquish them from earth. The team is compromised of multiple teenagers, with different, and for the majority, very three dimensional characters. It moves from one character's stand point to another, but does so in a way that is not confusing at all, but instead allows you to see their opinions, and why they say what they do. The majority of the book is what happens when it starts to go wrong. Task Force has a lot of action, and a decent amount of character development.

Task Force was an interesting book, especially if you want action in a sci-fi setting. Point of view helps the story develop a good bit, and switching between characters really helps the point of view be told. There are a few characters who have very straight forward personalities, and lack back stories. This doesn't seem to hurt the overall plot line, however the book is far less cerebral then it could have been. I would recommend this to someone looking for a quick action read, in the ages of 11-13, and give it 4/5 stars, only losing a star for character development.

There is a small amount of language, but nothing profuse, and fits the characters and situation. They also very briefly discuss religion, but not in any kind of hurtful way.
KEYWORDS

Read more reviews by this Litpick Book Reviewer: Crazyman5
Recommend this book and review to your friends on Facebook