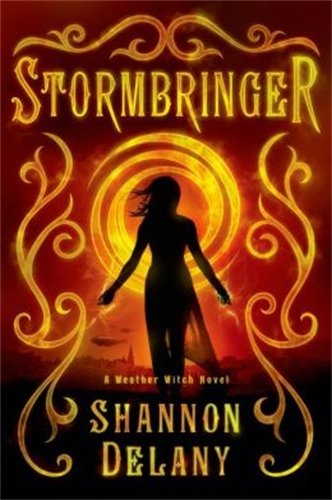 Stormbringer
by Shannon Delany
Age Range - 12 and up
Genre - Fiction

Are you ready to train to become a Conductor? This novel includes two story lines that mesh together throughout the story. The main story line is about Jordan Astraea, once a good socially standing young lady of Philadelphia, who trains to become a Conductor-the Weather Witch that serves as a living battery to keep the airship Artemesia aloft. At the beginning of the story she is only a Weather Witch, but with Jordan’s talent she is able to suffer through the brutal training to reach her goal, becoming a Conductor. On the other hand, the side story is about Rowen who is determined to find his only true friend/true love, Jordan. Since he is wanted for murder he has found himself aboard the wrong airship. He suffers throughout most of his time on this airship because of the very brutal crew and dangerous cargo. In the end, Jordan becomes a successful Conductor, and Rowen intercepts the Artemesia in order to find his true love, Jordan Astraea.

Opinion:
Stormbringer is easily the worst book I have ever read. This novel was like a ghost. I was still able to read it, but the book was dead. I believe that this would have been better if the story took place in the future instead of the past, 1844, because the olden language bored me, and there were not any airships in 1844. It would have been more reasonable if instead of the story taking place on airships, the story took place on boats. Overall, the only good part of the novel was the end when Rowen and Jordan love each other even though they both changed completely. All in all, Stormbringer was the worst book I have ever read, but I enjoyed the ending.
Rating:
1
Content Rating:

There was nothing offensive in this book, and the novel is not necessarily for only a mature audience.
KEYWORDS

Read more reviews by this Litpick Book Reviewer: S.Ehlers
Recommend this book and review to your friends on Facebook