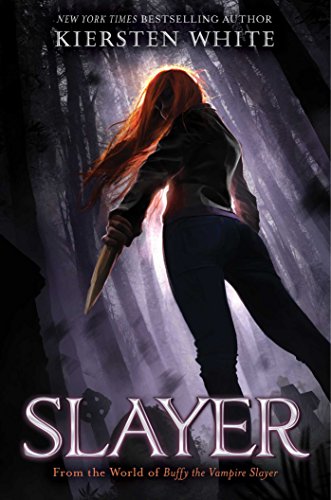 Slayer
by Kiersten White
Age Range - 12 and up
Genre - Adventure

Slayer by Kiersten White is a new series that takes place in the Buffy the Vampire Slayer universe. It is set after Buffy's time when a new slayer has been chosen and all magic has been destroyed by Buffy. The new chosen one is a girl named Nina who is studying at the Watcher's Academy in Dublin, Ireland. To all of the other watchers, including her mother and twin sister, she has been dubbed not important. She doesn't get to do any kind of defensive or weapons training. Her twin sister, Artemis, is seen as the strong and dominant one. One day while outside the castle walls, there is an attack by a hell hound. Nina has the sudden urge to attack and kill the hell hound, and she does, surprising the people around her. She lets the council members know that she felt different once the Seed of Wonder was destroyed two months before. Her mother denies that Nina could be a slayer, and nobody really wants her to be one except a former council member who has come back from the dead.

I enjoyed this book, and it introduced me to the world of Buffy the Vampire Slayer. My mom was a fan of the show growing up, and we have watched a few episodes of the show. From what I watched and what I have read, the book has enough explanation of the world that I was able to understand what was going on. I enjoyed the characters. I connected with the character Artemis, as I have two little sisters who I help look after. This was also the first book that I have read that had a boy-boy relationship.

There is violence and killing of some characters.
KEYWORDS