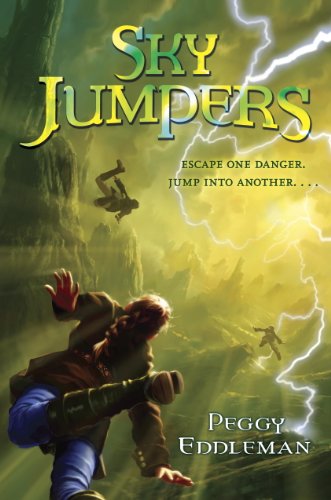 Sky Jumpers by Peggy Eddleman takes place in an isolated town called White Rock. It is surrounded by the green bombs left from WW III. This keeps the people of White Rock safe from bandits. However, the Bomb’s Breath, which is how the toxic gasses have been known to be called, is so deadly to breathe in you die instantly. Citizens of White Rock have to enter the town through only one safe passage. Everybody fears the Bomb's Breath. Well, ALMOST everybody. Hope and her friends Aaren and Brock jump off cliffs into the Bomb's Breath; they found out all you need to do is just hold your breath. It’s that simple.

White Rock's citizens are inventors, even the four year olds. But not Hope; she just can’t invent. Every time she tries to build something, her invention breaks. She’s an outcast.

Trouble starts when bandits come up through a secret tunnel. They want White Rock’s rare medicine that cures a deadly sickness known as Shadel's.

If White Rock's citizens hand over the medicine to the bandits, they will surely die of the sickness. To make matters worse, the bandits are holding the citizens of White Rock captive and checking everybody fourteen and up to make sure they are still in White Rock. Now it is up to Hope, Aaren, and Brock, who are only twelve, to make the dangerous trek to a neighboring town. But on their way, a deadly blizzard comes upon them. They need to get the guards of Browning to help them. Will they make it in time? Now it’s Hope’s chance to prove herself worthy of being a citizen of White Rock, by saving it!

This fast-paced, nerve wracking, edge-of-your-seat-story  is bursting with adventure, danger, and excitement!!! I loved this book; it was flawless!! Peggy Eddleman did a wonderful job on this story; there were no bad or confusing parts. I recommend this book for readers who like excitement and adventure! I loved the characters. Hope was courageous and thought of others before herself. Aaren was always cautious and adventurous. Brock was brave and spontaneous. I also loved the plot in this book. How it was in the future but very similar to our lives. I felt like I could connect to the characters. I recommend Sky Jumpers to readers who like adventure.

Read more reviews by Litpick Student Book Reviewer: muffin
Recommend this book and review to your friends on Facebook