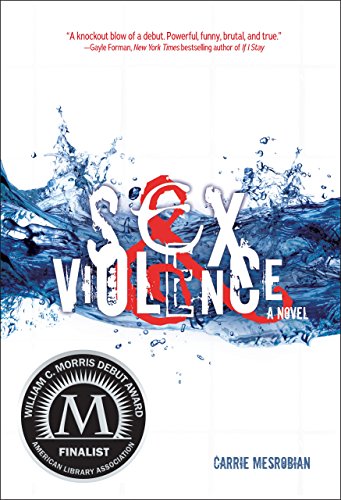 Evan Carter is always the 'new guy.' Every couple months, his father moves his family across the US and Evan is left with no friends, only a list of past hook-ups in his wake. He knows just which girls to hook up with and his most recent boarding school is no exception. One lucky day, a girl comes into his room and before he knows it, Evan is in the middle of hooking up with her. It’s not a one time thing but it does end quickly, after a few guys find out. They assault Evan and his dad pulls him from the school, taking him back to where he grew up in Minnesota. There, Evan has to interact with a group of kids about his age who are about to go off to college and, through some struck of luck, become Evan’s friends. He’s traumatized by the assault and Sex & Violence is Evan’s story of dealing with it.

I absolutely loved Sex & Violence. It's a book that isn't plot centered but instead character driven and the characterization is done extremely well, making it my favorite aspect of the story. That said, the characters in this book are older teens and it does deal with mature content so I would recommend this book to teenagers ages 16 and up.

Sex & Violence follows Evan Carter after an unfortunate incident in his school’s bathroom. After being brutally assaulted for having a sexual relationship with another student, Evan’s father moves him to his home town. For Evan, moving isn’t anything new but the residents of the town are. Evan’s gone to a number of schools over the past few years and is used to being the guy no one is ever friends with. During his summer in Minnesota, however, things changed. Through no aspirations of his own, Evan ended up befriending the locals in his new town and, probably, had the best summer of his life.

Sex & Violence follows Evan’s character arc instead of a line of action or plot. Evan’s summer in Minnesota changed his life in more ways than one. Not only did he learn to actually deal with his dad, he made friends (through no real effort of his own), he learned to get along with his dad, bonded with his uncle, and made a lot of changes for the better for himself.

Given the title, Sex & Violence follows a story that begins with sex and violence. Throughout the story, there is mature content such as sex, violence, underage drinking, and drug use.
KEYWORDS

Read more reviews by this Litpick Book Reviewer: verybookly
Recommend this book and review to your friends on Facebook