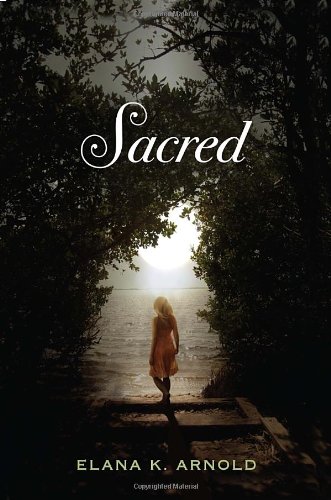 Ever since her older brother died a few months ago, Scarlett's life has been falling apart. Her mom sleeps all day, her dad is distant and she has stopped eating. The only thing that brings Scarlett joy is riding her horse around the secluded island on which she lives. That is, until she meets Will. Will and his father moved to Catalina Island from Connecticut, which is exciting news for the residents of their small town. For some reason, Will and Scarlett are drawn to each other and it may be because of a secret Will is hiding.

My opinion on Sacred is split: there are some things I liked and some things I didn't. Overall I enjoyed the story, but it definitely has flaws. I loved the island setting - it was secluded and solitary and seemed very peaceful. It wasn't a tropical island, so the location was more natural and not like a resort. I thought it was awesome how the residents don't have cars but instead use golf carts to get around since it's so small. Scarlett starts out as a very troubled character - she has stopped eating and isolated herself from her family and friends. But throughout Sacred, Scarlett begins to open up and sees how she is hurting herself. It was rewarding to see Scarlett heal after the loss of her brother.

Speaking of Scarlett's brother, he was an important part of the story since his death is the catalyst for a lot of Scarlett's actions. However, I wished his character was developed further. We don't know much about him so it's hard to relate to Scarlett's grief because he was such a non-entity.

Much of the plot of Sacred revolves around Scarlett and Will's relationship and Will's secret. But besides that, I was just waiting for something to happen. The book lost direction at some points and turned into a romance drama as Scarlett and Will dance around each other. With some more focus and few more plot points, this book could have been better.

I was not expecting religion to play such a big part in Sacred, but I shouldn't be surprised because the title definitely has religious connotations. The religion in play was Judaism, which was very interesting because I don't know much about it. I liked how Judaism tied into Will's secret.

Overall I enjoyed Sacred, especially the setting and Scarlett's character development. But the novel lacked focus and direction, making the plot flounder around. I think if the author has some exciting plot points in store for the sequel, it will be a great improvement.