Now That You're Here review by alison_S 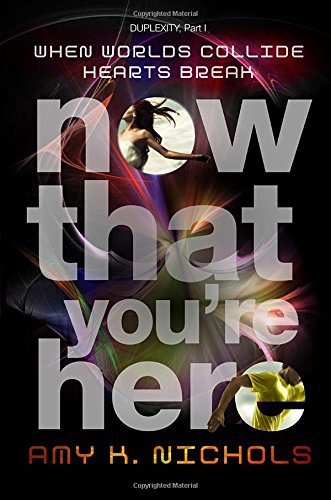 Now That You're Here
by Amy K. Nichols
Age Range - 12 and up
Genre - Fantasy

In Danny Ogden's universe, government-imposed curfews, surveillance programs, and even brainwashing (think 1984) can't guarantee an orderly America— they can, however, ensure a submissive one. Mostly. But in the midst of a resistance movement's massive-scale bombing, protagonist Danny Ogden plummets from his universe and crashes into our own. When he begs Eve Solomon, an artsy femme fatale in his universe and a science buff in ours, to help him return home, a weary Eevee agrees— she does need a topic for the school science fair, after all. But as Eevee gets closer and closer to the secret of inter-universal travel— the science fair project of the century— she also gets closer and closer to this mysterious boy from another dimension.

Let's get something straight: I don't like science. Science fiction? Yes. But science class? That's a different story. Yet throughout Now That You're Here, Nichols expertly blends science fiction with, well, actual science, and I (shockingly) found myself enjoying both. Though these gems of quintessential geekiness— think quantum theory, vintage sci-fi, and classic Star Trek— imbue the novel with a (charming) nerdiness, Now That You're Here centers on relationships, more than on research or academia. The romance between Danny and Eevee, for example, motivates most of the characters' decisions, and this unexpected-yet-unforgettable courtship enhances the novel's otherwise predictable premise with a much-needed emotional subplot. But while the Danny-Eevee romance is sure to enchant any teenage girl, Danny's almost-immediate fascination with Eevee does, at times, seem calculated for swoony-ness rather than realism. Then again, I suppose the whole from-a-different-universe thing would excite my interest too.

But Now That You're Here transcends your run-of-the-mill romance novel; while I couldn't help but enjoy Danny and Eevee's storybook romance, Eevee's ever-changing relationship with herself lent the novel an element of psychological complexity not found in more superficial YA romances. Though Danny's parallel world struck me as a tad generic, I still enjoyed Now That You're Here's heartwarming character relationships and charming geekiness.