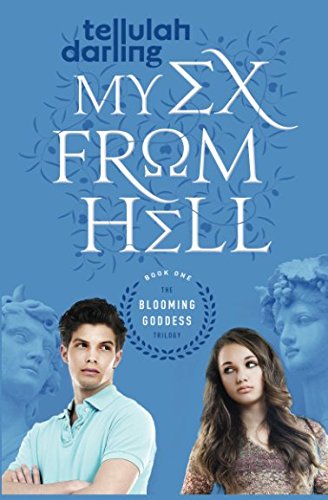 ‘My Ex From Hell’ is a story that centers on a seemingly human adolescent girl called Sophie Bloom.  She has two best friends – Hannah and Theo, and she has normal teenage problems in the form of the wicked, superficial, nasty Bethany. However in actuality, she is the reincarnation of the Greek goddess, Persephone, Goddess of Spring.

Things were supposed to run smoothly as part of Prometheus’ (Theo's) plan to help Persephone (Sophie) regain her memories as the Greek goddess, control her powers that are entailed with her newly discovered identity, and fulfill her duty to save humanity. However things go awry when she realizes her identity as Persephone before she was supposed to due to an unexpected meeting with an acquaintance from her past life – Persephone’s lover, Kyrillos (Kai), son of Hades.

The plot thickens, as Sophie must be protected from those who wish her harm (and it is not just anyone who wishes her harm, but the almighty Zeus and Hades), so that she may regain her memories and save humanity; for she stands in the way between the war of the Gods and the destruction of mankind. But the problems don’t just end there for Sophie!

“My Ex From Hell’ is a superb book written by Tellulah Darling. It had a very good plot with Greek mythology themes and good action. I especially liked the fact that it was based on Greek mythology, as it is an interesting topic really worth delving into.

There was also very good interaction between the characters, however there was one thing that was a bit lacking, and that is the relationship between Prometheus and Persephone. I would like to know more about the history of Prometheus and Persephone’s friendship, to find out why he would give up so much for her – perhaps it will be explored in the next books.

Also the book needs a few minor editing but besides that, it was all good. Tellulah Darling’s writing really pulls the reader in with her storytelling, and it was hard to put down the book, all the way to the end (which ended with a nice cliffhanger); I was perplexed to find that I had finished reading the book, and I will be interested in reading the next books in the Blooming Goddess Trilogy to find out what kind of situations the protagonists will get into.

There is reference to alcohol at the beginning of the book during the Halloween party.
KEYWORDS

Read more reviews by this Litpick Book Reviewer: detectiveginger
Recommend this book and review to your friends on Facebook