Made For You review by swalia 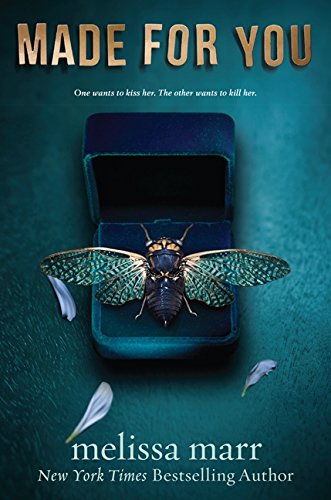 In the small town of Jessup, North Carolina, history is everything. It determines your popularity and your status. For Elizabeth “Eva” Tilling, popularity was never the problem, but the death of her friends is. After Eva was hit by a car, she realized that she had the power to foresee people’s death by touching their bare skin. As other girls are found dead, it becomes apparent that she has to do something about it. Along with her best friend, Grace, and Nate, a boy who she has secretly crushed on ever since they were friends many years back, she begins to slowly uncover this mystery. But what Eva finds surprises her. One of Eva’s classmates is after her, and will do anything to get her. Will she find out who is after her in time to keep her friends alive?

I rated Made for You by Melissa Marr a three out of five because this book was very interesting and fast-paced. I finished this book in two days and was immediately pulled into the mystery of this book. The plot twist at the end was very surprising. During most of the book, I thought I knew who the killer was, but I was very surprised when the actual killer was revealed. I think that the actual killer could have been developed better during Eva’s narration, because he was not mentioned very often. This book is told from Eva’s, Judge’s, and Grace’s point of view. Personally, I liked the different point of views, because each person had different personalities and told the story very differently. I felt that the romance in this book, outshined the paranormal ability of premonitions. Her ability to foresee deaths was hidden behind her love for Nate. If this book was less of a romance and focused more on the magical abilities and mystery of the book I would have rated it a four. I would recommend this book to girl age 14 and older, who like romance and murder mysteries.

Many mature situations and relationships, and violence.
KEYWORDS

Read more reviews by this Litpick Book Reviewer: swalia
Recommend this book and review to your friends on Facebook