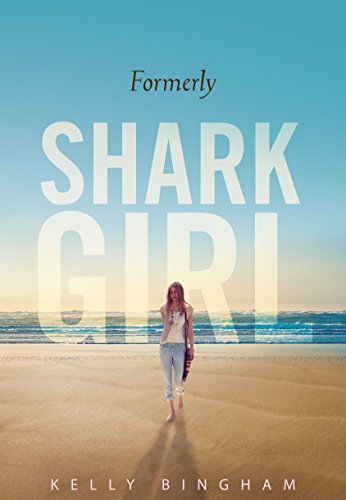 ClarissaAdeleMorgenstern
Age at time of review - 13
Reviewer's Location - Baltimore, Maryland, United States
View ClarissaAdeleMorgenstern's profile
Formerly Shark Girl, by Kelly Bingham, is the sequel to Shark Girl.   In Shark Girl, Jane is attacked by a shark and loses her right arm.  She reached a near-celebrity status and received a lot of letters from people, many of whom believe Jane was spared for a reason.  Now, a year after the attack, Jane is a senior in high school and is torn about her future.  Although an avid artist, Jane cannot decide between going into nursing or art.  She feels nursing would be a way to "give back" and discover the reason she wasn't killed by the shark, so she completes training for CPR and other emergency procedures.  At the same time, she is working hard to regain her former art skills (which were lost along with her dominant hand), although she is afraid of letting people down and pursuing art seriously.  In order to be accepted to nursing school, Jane needs to pass science class.  Her tutor is also her former crush, Max.  She doesn't think he is interested in her, and she might be better off with a boy from her science class.  Jane has to decide what college to go to, and soon.  Will she choose to pursue nursing, or will she become an artist?

This book was okay.  Like its predecessor, Formerly Shark Girl was told in poems and letters.   There wasn't much conflict or plot, and many of Jane's actions were predictable.  I felt that Formerly Shark Girl was written just to tie up loose ends from Shark Girl.  Having read Shark Girl, I did want to find out what happened to Jane and other characters, so this book felt a lot like an extended ending.  However, I don't think that this book was as emotionally compelling as Shark Girl.   I understand why Jane was so torn between art and nursing.  I also really liked that the reader got to see some of the letters written to Jane to understand the pressure she felt.  I don't think this book was as emotional as Shark Girl.  This is a relatively quick read, and I would recommend it to realistic fiction fans in sixth grade and up.