The Forever Song review by verybookly 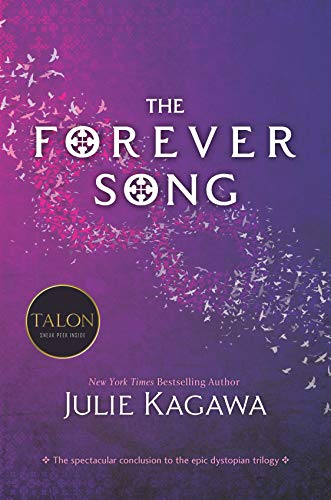 Revenge. That is all Allie Sekemoto has on her mind. Along with Kanin and Jackal, she goes on a search for Sarren, a psychotic vampire who has murdered her love and has the intentions to destroy every living thing. Their goal is to prevent Sarren from releasing the virus that will destroy everything but they learn it's not an easy feat because Sarren is brilliant and willing to prey on their weaknesses to get his way.

The third and final installment to the Blood of Edem trilogy certainly didn't disappoint. The story starts with Allie Sekemoto bent on revenge for the murder of her love and that was that aspect I loved to see play out the most. A number of characters avoid revenge and take the higher ground but Allie wouldn't. She wanted to avenge which I think a number of any people would do in her shoes.

Although the story begins with revenge, it's about more than that. Sarren, the vampire who murdered who Allie's love, is determined to release a virus that will destroy all living things. While that lends itself to be a line of tension in the novel, I feel that The Forever Song certainly went beyond expectations with conflict. For me, the first two books felt more action-packed and while the third book contained great action scenes, it felt like the conflicts in this story stemmed more from emotional turmoil and emotional manipulation.

The Forever Song maintained its dark mood that has been evident from the first novel. Allie Sekemoto's voice is clear and strong, as it has been from the beginning, and immediately pulled me back into the story after having been away from the second book for awhile. It was also great to see the development of Allie and Jackal's relationship; a relationship I think the story couldn't function without.

The Forever Song was a great ending to an already wonderful trilogy.

Sarren, the villain in this novel is not afraid to play games with those working against him. Some of the games felt very sick and dark.
KEYWORDS

Read more reviews by this Litpick Book Reviewer: verybookly
Recommend this book and review to your friends on Facebook