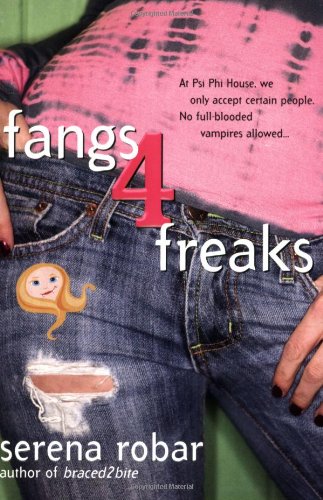 In this sequel to Serena Robar's Braced 2 Bite, Colby has set up a sorority house that's rather exclusive. Psi Phi is just for half-blood vampires. Colby is one of these half- bloods, but she's more than that; she's their Protector, the one who got rid of the unfair laws persecuting them. Without her, they could all be executed! Of course, now that they're free to exist, that doesn't mean all of their troubles are over. The half-bloods are still being targeted, and it looks like there's a spy in the Psi Phi house. Aside from being a that, Colby's got some problems that aren't so particular to her status as half-blood Protector. Namely, guy problems--she and her boyfriend Thomas aren't taking things to the next level the way Colby would like! Despite the fact that Colby has freed her people, life is anything but cushy for the sisters at Psi Phi House.

Fangs 4 Freaks is a well written book and an original take on the vampire legend. Serena Robar's characters are original and fun to read about. These include a half-blood vampire who wants to be a vegan, one who is overly confrontational, and another who, as royalty, sees herself as above the rest of the sisters. This novel is a fun, suspenseful read with a real surprise twist at the end! It isn't necessary to have read Braced 2 Bite before picking this book up, but it would probably help to fill in some of the background information that I'm still a little fuzzy on after finishing the novel. Fans of vampire novels and even those who don't have a great love for vampire stories will love this book!


Read more reviews by Litpick Student Book Reviewer: JPear
Recommend this book and review to your friends on Facebook