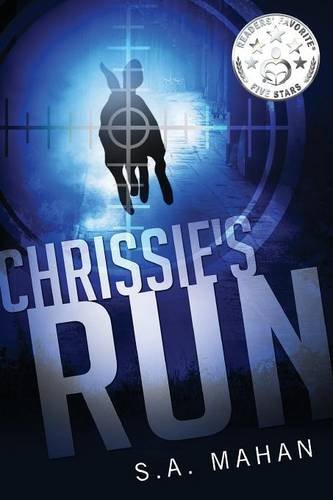 In the futuristic New Republic, there is no such thing as being pro-choice or pro-life. Regardless of a pregnant woman's age, she must go to a Parlor. There, doctors will analyze the ultrasound and decide whether the baby is fit to live. That cold, mechanical process doesn’t sit well with sixteen-year-old Chrissie Wright. She’s just found out that she and her boyfriend, Jason, are expecting a boy with deformities. Since their developing baby, little Daniel, would be missing a hand and foot, the government has set up an abortion for her. Following the abortion, she and Jason will be sterilized so that their “bad” genes can’t be passed on via a subsequent pregnancy.

Jason is relieved that there’s a solution, but Chrissie doesn’t see the problem. She wants her baby! To avoid the Parlor, Chrissie embarks on a journey to Haven, a place that she’s heard is safe for girls like her. Its existence may only be an urban legend, but she’s willing become a “runner” to secure a future for Daniel. In her quest, Chrissie finds guides who want to help her reach Haven. Meanwhile, vicious monster-men attempt to stop her. Who can Chrissie trust to save her baby?

Anyone who watches the news can tell you that public opinion is sharply split on the topic of abortion. Chrissie’s Run joins the conversation by asking, What if abortions were mandatory? Young Chrissie was one-hundred-percent positive that she wanted to keep her baby boy. I admired how she was so willing to leave behind her easy life as a politician’s daughter for a cause that she believed in. Her boyfriend, on the other hand, was a little infuriating. Jason had virtually a cameo, and his few scenes made him less than likable. He didn’t care about the baby and had zero chemistry with Chrissie, so their relationship was not believable to me. A twist at the end may redeem him in some eyes.

Chrissie’s journey as a rebel “runner” was filled with allusions to the Bible and Greek mythology, which were fun to catch. It was also packed with vivid action. At one point, Chrissie says mournfully, “So much death,” and I heartily agree. I was surprised at the rate Chrissie’s guides were killed off. For a Christian book, it was rather gruesome. Of course, the violence had an end result, but verbal sparring can also be exciting to read.

In regards to Chrissie’s pregnancy and motherhood, I felt that it was underrepresented even though it was a central theme of the novel. When she has the baby, she doesn’t undergo any great change. Little Daniel appears, but as a secondary character. Chrissie is a sweet, strong girl, but I felt she doesn’t act like a mom. In my opinion, the writing made the relationship feel detached, like he was her brother, not her first child! The sudden time jumps made it difficult for the reader to capture emotional growth, yet they kept the story fast-paced.

Genre-hopping keeps readers on their toes! I was expecting a Christian book with a dystopian background and it ended up being that as well as sci-fi, survival fiction, and romance. Sci-fi can be a hard genre to blend in, so I applaud the creativity. Chrissie finds love in a hopeless, unexpected place, which adds a touch of sweetness to the novel.

Chrissie’s Run is a teen novel that offers more than the boy-meets-girl mix. Fans of thought-provoking novels and strong female characters would like spending a few hours running for a better world with Chrissie.

It's a Christian dystopia, but it's more appropriate for older kids because of violence and abortion.
KEYWORDS