The Bunker Diary review by crabby 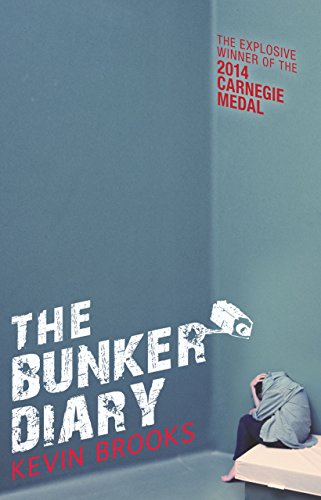 The lights. The clock. The elevator.

These are the only constants in Linus Weems’ life after he awakens to find himself in a dark room, the chloroform used to incapacitate him still seeping from his lungs. His last memory is of the “blind” man who asked for help with his luggage— and ended up adding Linus to the pile. Now the straggly teenager is trapped in an inescapable underground bunker consisting of several rooms, kept company only by the ticking of the clock on the kitchen wall. However, while there is no one with him, Linus is certainly not alone. The perpetually empty elevator at the end of the bunker goes up and down once a day, but won’t take him with it. The lights go on and off at precisely the same times each day. There are cameras mounted in every room. This is a game, Linus realizes. And one day, when the elevator opens once again, he meets its newest player.

Linus’ narrative makes for a gripping page-turner from the very start. The effectively crafted atmosphere of suspense is maintained throughout the novel, fearful tension saturating every page as Linus struggles to hold onto his sanity, even when his hopes are repeatedly crushed. The Lord of the Flies-esque scenario that develops within the bunker is a clever examination of the human condition, seen through the eyes of an endearing but troubled teenage boy with an authentic voice. Although, while the bunker is merely an intriguing backdrop for a primarily character-driven story, I still found myself disappointed with the lack of resolution in the plot, which was, until the end, building toward a promising climax— a climax that never really happened. The outcome of the story is implied, but the puzzle built throughout the novel is never actually solved. What was a tantalizing mystery was left disappointingly murky, the identity and motives of Linus’ kidnapper remaining unknown. Perhaps this ambiguity was a part of the message that happy endings are unrealistic, but all the loose ends could have been wrapped up much more soundly while still retaining the same impact. Buckle up for a harrowing, fascinating journey— but don’t hold your breath for an exciting conclusion.

There are a couple scenes with graphic violence, and there are quite a few deaths.
KEYWORDS

Read more reviews by Litpick Student Book Reviewer: crabby
Recommend this book and review to your friends on Facebook