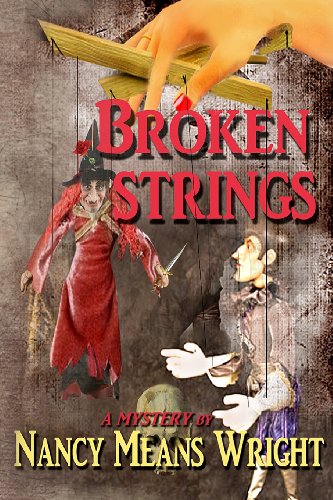 Former actress and amateur detective Fay Hubbard works with a puppet theatre troupe for the creative but demanding Marion Valentini. Marion brings down the house with a performance of Sleeping Beauty but not for her performance skills nor her ability to construct the intricate puppets. She is found passed out near the puppet controls and dies in the hospital later.

It becomes apparent that Marion was murdered, so Fay and her friends and family have to wade through Marion's past of estranged family members and her philandering husband to find out who did it.

Broken Strings is a wonderful, cozy mystery with a brilliant protagonist. Fay is given various details that make her a well-rounded, developed character. She has an enthusiastic dramatic personality attributed to her acting career. She is also shown to be a warm and nurturing figure. Her house is full of foster children that she guides with a firm but maternal hand.

The puppet theatre aspect is solid as the readers learn of the various details. Everything is dwelled upon such as Marion's beautiful designs and her desires to change the standard fairy tale script to fit modern tastes. For example, the ending of Sleeping Beauty is altered to fit a vampire theme.

The mystery draws the reader in with the various leads and red herrings that are usually found in such mysteries. Many of them are discovered by the characters, particularly Fay's foster children. These discoveries are also linked to the children's troubled background. One of the children is temporarily kidnapped by his father, and another runs away after a fight with her boyfriend. Both of the kids’ experiences are traumatic, but they also reveal their survival and observational skills to find clues to Marion's death.

Broken Strings is a fun book in the cozy mystery genre. It is warm, detailed, and makes for a simple, fun read. With no strings attached.

Read more reviews by this Litpick Book Reviewer: juliesaraporter
Recommend this book and review to your friends on Facebook