The Bolds review by masongill 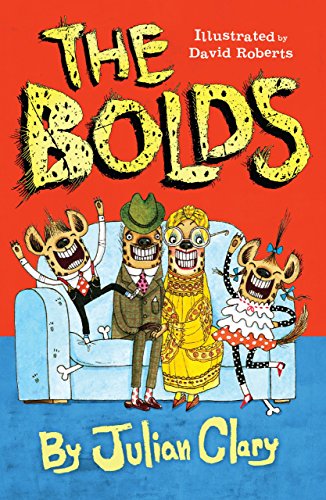 The Bolds by Julian Clary is the story of a family of hyenas who pose as a human family because they think it will be fun. The Bolds try to fit in with the humans, and are so convincing that the humans around them do not know that the Bolds are hyenas. The Bolds are afraid that if the humans ever find out, they will be caught by animal control and be sent away. When they meet a pack of wild hyenas the Bolds realize the other hyenas are in trouble. They want to help, but can they without reavealing their secret to the world?

The Bolds is a pretty good book. The story is a quick-paced read and very funny. My favorite character was Mr. McNumpty because I could not figure out if he was a good guy or a bad guy untill the end.  And the ending was a very good suprise. The things I liked about this book was that the author did a good job of making the hyenas seem like real people and did not make them different from the other characters.  I thought that the jokes and humor in the book was engaging. My only suggestion would be that I would have loved to get to the "big problem" earlier in the book.

Read more reviews by this Litpick Book Reviewer: masongill
Recommend this book and review to your friends on Facebook