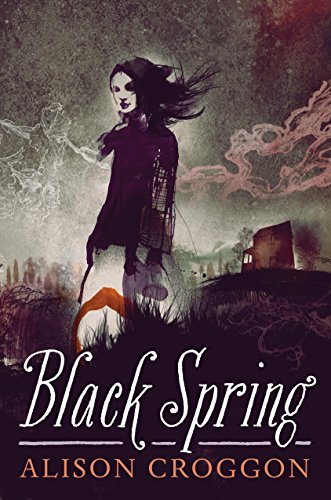 Told from different point of views, Black Spring is a tale of death, love, and magic.  The story is an adaptation of Wuthering Heights.  Hammel moves into a home owned by a man named Damek. Damek is not at all who Hammel was expecting, and, when Hammel returns to his house, he is told Damek's history by his housekeeper Anna.

Anna tells Hammel that damek was brought into Lina's family by her father, an important lord.  Damek and Lina strike up an instant friendship, because Lina's impulsive and reckless ways work with Damek; Anna was more cautious and stuck to her comfort zone.  Anna was jealous of Damek and Lina's friendship.

While wizards are revered in Elbasa, witches are killed.  Lina's purple eyes exposed her for a witch. Ezra, the wizard who runs Elbasa, has a particular hatred for Lina but cannot kill her because she is protected by her position.  Added into the plot is the practice of vendetta, which allows a victim's oldest male relative to avenge a murder.  Lina's family is exempt from vendetta because they are royal, but Anna's family has no such luck.

Black Spring tells of a haunting land where magic runs wild and vendetta can go on for centuries, until all that is left of Elbasa is widows.

Because Black Spring was written in a Victorian style, I found it hard to get into.  After I got used to the style of writing, I found it interesting and well-written.  It made me feel anager, sadness, jealousy and an array of other emotions.  the characters were well-developed - I grew to like some of them and hate others.

However, there were some weaknesses in the character development and plot.  I did not find Hamnel interesting.  I felt that he was just a traveler running away from his life.  I did not understand why the beginning of the story was told from his point of view.  That confused me.  I also didn't understand how the book jacket connected to the book.

Most of the story is told from Anna's point of view.  This may be why the love between lina and Damek seemed slightly fake to me - they seemed more like best friends than two people in love with one another.  Since Anna was being excluded, she couldn't easily protray the love.

Lina's character was also unappealing.  She was temperamental. One minute, she was fine, and the next, she was yelling and angry. Anna should have had more screen-time; she was telling the story about Lina, and I felt like she could have been incorporated more as a constant character to even out Lina's mood swings.

One strength of the book is that is different from many other teen books.  There are a lot of fluffy-type romance books out there for young adults, and this one was obviously different.  As the author wrote the story as a "love letter to Emily Bronte," I might have enjoyed it more if I had read Wuthering Heights and made more connections.

I would recommend this book to eighth graders and up, because anyone younger might not like the Victorian writing.

There wasn't any bad swearing and no romantic scenes. There were, however, scenes of violence that might be disturbing to some readers. There was also the concept of the vendetta.
KEYWORDS