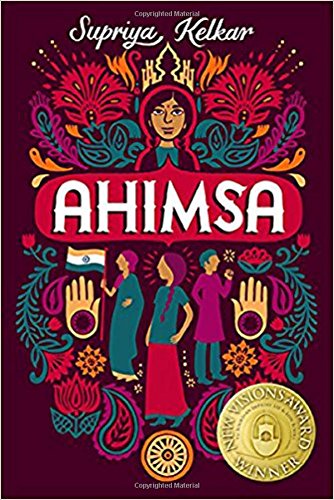 Ahimsa means nonviolence. That is the main motive for the Freedom Fighters of India. It's the 1940's and the Indians are under British occupation, and the Indians want them out. We follow a girl named Anjali and meet her as she is painting a giant black Q (Quit India) on the side of a British Officer's house. Anjali’s mother used to work for a British Officer as a secretary, but she quit because she was tired of all the British decrees and that the officer wasn't helping Indians who were wrongly accused of crimes against the British.

Anjali's normal life is flipped upside down when her mother joins the freedom movement and burns all of their foreign-made clothes. They also start cleaning their own outhouse and be-friending the "untouchables," or the Dalit community. The untouchables are the people who get the most hate and prejudices because they clean toilets and are seen by others as unclean. Anjali befriends some of the Dalit kids. Her mother and some of the other freedom fighters try to integrate the Dalit children into Anjali's school, which ultimately causes problems for everyone involved.

I liked this book. It was a different kind of story from what I usually read, but that made it memorable. I liked the friendships in the book between people who had different backgrounds. There was some bullying to the main characters, and the violence between the Hindus and Muslims reminded me about what I’ve learned about the Egyptians and Romans and how they fought a lot. This book is a great introduction to cultural diversity, and it also taught me about India's history.