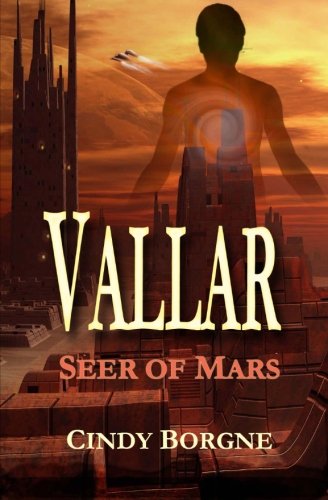 Vallar
Cindy Borgne
Ian Connors happens to be the secret weapon of a powerful military faction bent on conquering all humans who have colonized Mars. His job is to use his psychic ability to uncover secrets or hidden bases of other factions. Ian not only uncovers a valuable hidden mine through his visions, but also Kayla, a woman he sees himself with in the future. The only problem is she's on the other side and fighting to save her people.Ian discovers the death and destruction his visions can bring when in the wrong hands. He realizes he has no choice but to escape his faction, but the admiral is not about to give up his prized psychic. Deep down, Ian longs to be with Kayla. He's inexperienced in a corrupt world. His only edge - visions of the future. ABOUT: Seer of Mars is a dystopian story set on Mars with a psychic twist and a touch of romance. Written for those who love adventure and suspense in a world where people struggle to survive.
1 Vote

Ian is a pyschic working for the powerful marscorp faction on Mars. Ian has visions of a girl that is important to him, and when he is taken on a raid of an enemy base, he begins to realize that marscorp isn't as nice as he was raised to believe. When Ian has a dream about an enemy mine, Marscorp immediately goes to kill the peacful people living there and take control of the mine, but Ian realizes that the girl he dreams of is a member of that enemy faction. Ian nearly dies there, but an enemy soldier rescues him, who is then shot and killed by marscorp soldiers.