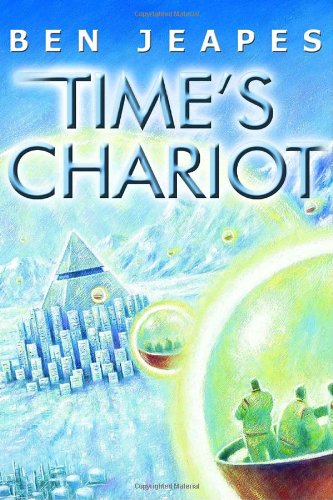 Time's Chariot
Ben Jeapes
THE HIMALAYAS, 5000 BC:Commissioner Daiho is dead, but there’s no question of foul play. The murder of a Home Timer is about as likely as unauthorized interference with the work of a Correspondent. . . .Isfahan, Arabia, 1029:Abu Ali was startled. He hadn’t heard the stranger enter. The Correspondent was even more alarmed—his enhanced senses would have picked up the arrival of any normal human. Then the stranger spoke, and it was the language of the Home Time. Seconds later, Correspondent RC/1029’s world went dark.The Home Time, 2000 Years Later:Field Operative Rico Garron is about to have a very bad day.
1 Vote

This novel is science fiction, action, mystery, and historical. Its purpose is to entertain. This story is set in future period called the Home Time. In the Home Time, it is possible to travel back in time as long as one is careful not to upset the history of the world. If history is drastically altered, the time stream will split and many more people will be created. The main problem with the Home Time is that it will end in twenty-seven years and it will no longer be possible to travel through time.