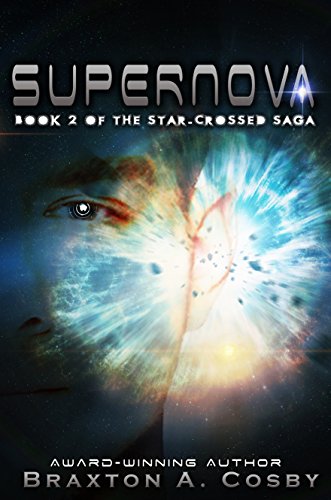 Supernova (The Star-Crossed Saga Book 2)
Braxton A. Cosby
The follow-up to the critically acclaimed space opera romance debut Sci-fi, novel Protostar, from award-winning author Braxton A. Cosby, The Star-Crossed Saga is written in the spirit of The Hunger Games and the Divergent Series. 2015 Readers' Favorite Silver Medal Winner for Scifi Space Opera Romance WHAT YOU CHOOSE, BECOMES YOU…Against everything he had known as truth, William called off his assassination and made the choice to protect the teenage girl Sydney from the forces seeking to destroy her and these two starcrossed lovers. But just as these two starcrossed lovers are beginning to explore their relationship and search for answers to the mysteries of Sydney’s existence, she advances to the next stage of her Star-child evolution—Supernova—and struggles not only to control her new powers, but also the emotions for her new love. William seeks to find the truth behind Sydney's erratic behavior, while overcoming the new threat headed to Earth to destroy them. With a new villains and old allies on the horizon, and a civil war brewing on William’s home world, will self-sacrifice prove to be the only way for him to achieve victory and defend his love, or is there another way?The follow-up to the space opera romance debut Award-winning novel PROTOSTAR!Book 2 of the award-winning StarCrossed Saga series, where teen romance blends with science fiction to open a whole new world of action, adventure and discovery! Rated one of the best space opera book series and sci fi alien romance.
2 Votes

Following the events of Protostar, Sydney is advancing as a star-child – as well as advancing in her relationship with William, who has sworn to protect her. As Sydney progresses into the next stage of her evolution – Supernova – she must confront her newfound powers and emotions. With an army coming for Sydney soon, William vows to figure out Sydney’s powers. Can he understand them as well as stop the oncoming army in time? Will these star-crossed lovers live to love another day?

What's this?
Supernova (The Star-Crossed Saga Book 2) review by jotaf

Supernova is the continuation of The Star-Crossed Saga. Sydney and William's relationship is growing stronger than ever. No other bounty hunters have come after Sydney yet, so you could say that life is going great. Great, that is, until Sydney wakes up in the hospital.

She has no memory of how she got there, but William tells her that she jumped off her roof. Even if she did jump off her roof, that doesn't explain how she broke her leg, because she is supposedly nearly invincible. It is also strange that the day after she gets home, her leg is healed.